It was the coach’s sixtieth birthday this year so we took the opportunity to get some payback and entered him for a fell race. Nearly ten miles and over 1200 feet of climb with stiles and river to swim through this one would make him really miserable we thought.

Meticulously organised by Dark and White Events there was an extensive kit list which required mobile phone, emergency money, waterproof top, energy bar and a drink. Dark and White provided a map which should have been redundant as there were neat yellow and blue marker arrows all along the way. Pre-race instructions even included a video of the route! Not really a fell race, the route was mainly on tracks and there was even a water station with goodies at six and a half miles. The event seemed a little like a long Park Run with hills.

Times were calculated by dibbing at the start, at the feed station and at the end and with a staggered start you never knew how you were doing until the final results came in. Popular, the race was oversubscribed with 213 finishers.

The race starts in a muddy field just above Calver and immediately enters into a two mile, 600 foot climb with most of the competitors immediately breaking into a steady walk. There is then a tricky for some descent off Longstone Edge to Great Longstone where those of us currently unable race could watch and laugh as coach struggled past. There’s then another whacking great climb before a long and wet descent down Coombs Dale towards Stoney Middleton.

Striders identified as competing were:

Normally Sam Brown would be expected to thrash James Fulcher but, unused to being in the lead of anything, he managed to lead half a dozen of the field on a mile detour. Peter Brown was first M60 but with only three others in his age category nothing to inflate his ego too much. Jessica Brooks led all but one of the F40’s home; no prizes for anyone but competitors did get a nice certificate. 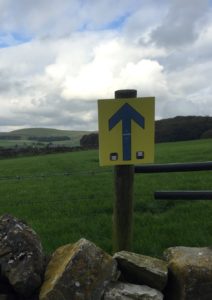 Who needs a map?

Later we met up in the Fox House for Sunday lunch which was most enjoyable but we’re now concerned about getting some extra twenty milers in next year’s marathon schedule.