If you combine all the positives about Fell Hell 10k (Moel Famau), National Cross Country (Harewood House), the Trust 10 (Longshaw) and Thunder Run 24 hour (Catton Hall) you’d make something like this brilliant trail race. But there was so much more.

Canicross! There were loads of dogs at the start, yapping eagerly, each with an owner / handler. Not one problem was caused for any other runner as the two mixed perfectly well. The course was wide at all points (except one two-rail stile) so they and runners had plenty of space. There was no barking when they’d finished – but there were baths of water for them to drink from or cool down in.

Three Day Eventing! The race sits alongside the International Horse Trials and runners get free entry to watch the cross country, show jumping and pony club events. There was a street food court (with a huge queue for the doughnuts), and all the saddlery you could wish for.

Imagine the courses at Harewood and Longshaw but make it just one lap for the 10k. Throw in a steep hill up to the folly tower and it gains a decent challenge. The only bit of road was a crossing. There were fields and copses and that brilliant steep climb (done twice) and grand country house landscaping; who doesn’t love a ha-ha?

As we dropped down the hill the first time we went through a field the like of which I have never seen before. It looked like someone with a giant bucket had deposited mud pies by the hundred. They were about a foot high and covered in grass and wild flowers. Ant hills! (Those flying ants that come out when it’s all humid in late July and August. Uegh!)

£13 entry brought a terrific event, an armful of goodies (mini mars, water, especially brewed bottle of local beer, crisps, banana and a medal), the day out at the horse event, a water station that we passed twice, all the parking you could wish for, and a very supportive atmosphere.

The final finisher was going at only half my speed, but the first three must have been on something as they were running 30% faster than I was.

It would be impossible to over-sell this great event / race.

I loved it, and will go and run it again in 2020. Hopefully both feet and ankles will be fit next time.

We should, seriously, put this in some sort of Championship. 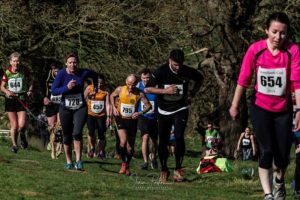