If a parkrun distance is all you can manage, or would want, to race on a Friday evening then the annual Greno-Chase may be what you are looking for.

I have run it a few times before, the first time was shortly after ‘Le Tour’ passed through the village; the bunting was still up and the crowds were out and in voice that night. Ask yourself, ‘what would it be like to through a vast cordon of shouting (slightly tipsy) supporters?’ and we’ll all tell you it is uplifting and exciting and an incentive to run faster – the whole village turns out for an ‘out out’ night to watch and then party after.

Sarah Allcard had, inadvertently and individually, entered as a solo team (a bit of a misnomer, I think), S18 Fliers, but a Striders team could easily mop up some silverware if four fast ‘uns were so minded.

Out of the park (no parkrun here, yet), right onto and up Main Street and past The Angel, left at the Old Harrow and up Stephen Hill, left at the eventual top and down past the Crematorium, fast down Skew Hill passing the Cow and Calf, another left back on to Main street, and repeat once. On the second lap runners turn back into the park for a finish line sprint.

A warm-up routine I went through was to run hard on some downhills including the last adverse camber right-angle left-hand turn on grass into that finishing straight. ‘Date with disaster,’ I thought, if the race turned out that way, as I could not stay anywhere near the inside line.

Through Striders being the biggest running Club present, and being prompt into and courteous while in the start pen and briefing, we found ourselves all on the front row and start line (and then let runner 127 get the star treatment!)  Code Blue! Code Blue! – are we seriously going to hold that position beyond the first 20 metres? (No, it turns out).

Inside 200 metres the field has stretched out as it is an uphill exit from the park and up the first street; you can tell already how well or poorly you are going to do, and some Striders had top five potential at this point.

A strange feature of this particular race is how they separate the local ‘amateurs’ from the Club runner ‘professionals’ and award separate prizes to the two groups.

Race experience helps with this event – it is short and sharp and you can hold a pace that you do not train at as it is only that parkrun distance but on wide roads with a good surface, and held or slow-moving traffic.

Report-writing requirements for the Club website mean we (the Guild of Race Report Writers) have to include the link to the online results, but the Grenochase results are never early in publication, largely because the organisers go to the pub after and enjoy a drink or two (Fake News Alert).  Would you believe that the results regularly take eight or nine days to appear on the small website / facebook presence and that none are printed and posted up in the village? That isn’t really a problem in this Strava-enabled world, is it? and with the disco-man being a fellow Strider (evening, Chris Smith) he could pick up any unlikely award if we had all left ‘early’.

Run as part of the village carnival week, and always on a Friday, the crowds break all the rules on alcohol in public and the Chip Shop has a constant queue out of the door for three hours or so – the side show to the race may actually be the main event. Too late for kids? not at all – they had all had an ice cream and a cake and possibly a siesta, so there were loads about and plenty for them to do – bring the family next year.

High on the hill as it is, one real local claimed to be able to see the Humber Bridge from his bedroom window – surely with a high-powered pair of binoculars and a very clear day. A change for this year was having a touch of classy food and drink – Coffee Cart and Gin Trailer in addition to the usual Ice Cream van.

Risk-aware Phil Dooley, freshly back from his Meerbrook blood-letting, had taken necessary precautions, and we believe he spilt not one drop tonight – good news there on the non-chafing front.

Of course there were some notable absentees – my lad Ben and Connor Hutchinson have had an ongoing ding dong in the race over the last four years, but neither showed up this time round, opening the way for a new winner. Public awareness of this race should be higher as a banner goes up on Halifax Road in early March, but the entry list was down this year on last – it shouldn’t be so.

Humiliation was avoided by all of us, though the talk was of it being a race and pace that took its toll on the legs so that it felt, at the same time, possible to be running a pb or running slower than ever before! 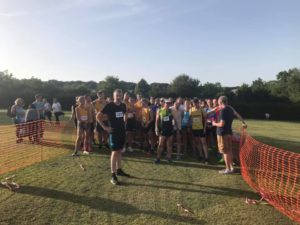