The Grisedale Horseshoe is, the race map says, a “traditional fell race” in which runners choose the best route between the checkpoints. It’s far better than that – “classic” would be a much better description, climbing as it does England’s second highest mountain, Helvellyn, by Swirral Edge (which is the easier of its two rocky ridges), along with Catstye Cam and St Sunday Crag. It’s only 16km, making a “medium” fell race – it’s the 1,525m of ascent and descent that makes it really testing.

Three Striders made the trip to the Lakes for this year’s race, which was run in glorious sunshine with barely a wisp of wind. The race was the fifth in the English Fell Race Championship, and so attracted the very best fell runners among a much bigger field than usual – 78 women and 223 men finished, with three retirees. The women’s race set off ten minutes ahead of the men’s, which gave the leading women in particular the opportunity to race each other for at least the first half of the race. Their race was won by Kelli Roberts (Helm Hill Runners) in 2:01:23. The men’s race was won by Brennan Townshend (Keswick AC) in 1:44:49, who was just nine seconds ahead of second place.

The three Striders results were:

On our drive home we compared our split times for the six checkpoints and finish:

The conclusions: Louis ran a pretty even race, Andy still needs to learn how to descend (and not go the wrong way off St Sunday Crag) and Dean needed a bit more in reserve for the last brutal climb up to the Wall Stile. 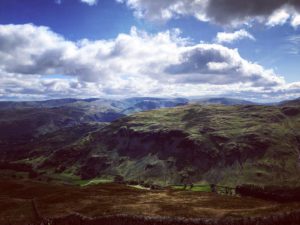 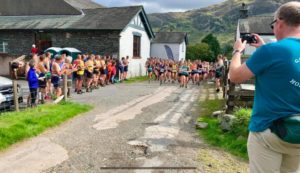 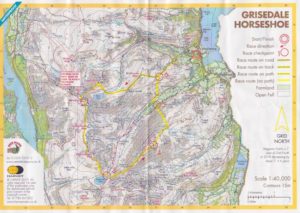