I didn’t really want to run this race, but, as this report attests, I’m so glad I did.

After what felt like a race every weekend through September and October, I was feeling mentally and physically burnt out. I remember floating the view with Gemma (my partner and fellow Strider), that perhaps we should give the Guy Fawkes 10 a miss. I was firmly rebutted; unlike me, she hadn’t run it before and was excited to give it a go.

So, off we went from one end of our great county to the other: to the village of Ripley, in North Yorkshire, to be precise. This is my third year running the race, and I continue to be hugely impressed by the organisation: parking is easy, the event starts at the humane time of 10:30am, the local scouts sell incredible cakes and much needed bacon sarnies in the village hall for post race sustenance. And then there’s the course: 10 very undulating miles around the local villages, with some absolutely jaw dropping views of the Nidd Valley. The first few miles are run on trails and can get a little tight, but then there’s a nice tarmac section which gives way to a brutal hill; the kind that makes you crave the (comparative) flatness of the Steel City. This hill, known as the Birstwith Brute, is by far the worst of the course’s three challenging sections, with the ‘Swinecliffe Swine’ tough but not offensively so, and ‘For Fawkes Sake’ offering little to write home about. Cumulatively, though, the hills make this is a very challenging race, and while the flatter and downhill sections offer some compensation, the Guy Fawkes 10 makes significant physical and mental demands of its runners, and it’s all the better for it.

Given my pre-race ennui, Gemma suggested that we run together, taking the view that sometimes you’ve got to step off the PB train. She was right. While the first few miles saw me holding back my urge to weave through the crowds and crack on, as we began the ascent up the ‘brute’, I found a sudden sense of peace: I was enjoying running for the sake of running. I became aware of the crisp leaves under my feet, the glorious vistas were taking hold of me; the blue skies, the trees and endless fields touched by Autumn.

After a while, my euphoria-induced chatter began to wear on my running partner (‘you’re talking very loudly, Dave’), but I managed to shut up for the last mile as we finished strongly and crossed the line into the beautiful grounds of Ripley Castle. The goody bag at this race is a thing of beauty: an actually useful long sleeved running top (black and electric pink this year), four chocolate bars (two Kit Kat Chunkies, a Wispa and a Double Decker in mine), and a box of Yorkshire Tea, and then we were soon tucking into the post-race nutrition — egg bap for Gemma, the aforementioned bacon for me — and not the scrawny type you sometimes get at these events, but good thick slabs of the smoked stuff on a robust white roll.

So, here’s to the Guy Fawkes 10, and the pleasures of resetting oneself to remember the ‘why’ of running. 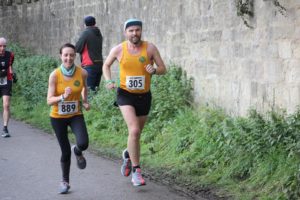