The Hallam Chase is apparently the world’s oldest fell race, having been run in one form or another since 1862. According to Wikipedia, Seb Coe thought it was horrific. Not often I run a fell race with a Wikipedia page.

The Chase is open to members of South Yorkshire running or fell racing clubs, and it’s run as a handicap race, with the idea being that everyone should finish at the same time. I realised when I saw the start list that this wasn’t going to happen for me. Stuart Jones, whom I never beat, set off before me. Mark Platton, whom I also never beat, set off with me.

Looked at on a map, the race is a straightish out-and-back. It’s dead short, less than three-and-a-half miles. When seen from within, it’s a demon made out of contour lines.

We lined up by the stand at Hallam CC/FC and set off at our various handicaps. I was about half way down, 12:10 after the first runner and 6:00 ahead of the last. We were a group of five. By the time we were half way down Coldwell Lane I was losing touch with the other four, as everyone set off completely hell for leather down the hill. Across Manchester Road, a few yards along Hagg Lane past cheering onlookers and suddenly it was sharp left and off the road. The descent of Den Bank started off sandy, treacherous but relatively shallow and then quickly turned into a vicious 20-odd percent plunge across fields down into the Rivelin valley. (“We’re going up this coming back, aren’t we?” “Yes.” “Arse,” said my internal dialogue.) Across a footbridge by the Iron Wheel pond and then we’d had our fun, now get climbing. A few yards on Rivelin Valley Road where I struggled to get my breath back, then into the steep ascent of Tofts Lane towards the pub, where there was plenty of support and some photographers to capture the pain.

We cut right, onto a decent path across the fields towards Stannington. By “decent”, I mean the surface, not the gradient. I managed to claw back a couple of places on the climb, but most of my fellow starters were still away in the distance. Eventually, we crawled our way up to Stannington Christ Church and were allowed to run round the marshal and set off back down.

The Stannington side of the valley is steep, but not half as bad as the Crosspool side, so I made a better job of the second descent. I made a much worse job of the second climb though. Not long after the footbridge crossing I found myself reduced to a walk, along with a big train of other people, occasionally being passed by a hardcore racer, pistoning up the hill.

Thankfully, the climb was steep but short and we were soon back on the road, grinding out the climb up Coldwell Lane and the “sprint” finish round the cricket pitch, where some sod burned me off big style and I still didn’t bloody catch Stuart Jones.

Across the line and a collapse on to the grass. Was that really only three-and-a-bit miles? What a race.

Somehow, somewhere, I managed to get my fastest-since-Strava 400m and half-mile times. Somewhere else, my pace dropped to nearly 15 minutes per km. God knows how I got home.

First runner back was Helen Doyle of Kimberworth Striders. Eugene Rybinski, of Dark Peak, was second to arrive.

One-third of the runners were Striders, including the fastest (Paul Middlemas, 25:07) and third-fastest (Stephen Schubeler, 26:13) on the night. Fastest woman (and second fastest overall) was Nicola Squires of Hallamshire Harriers, in 26:12. Mark Platton was the first Strider across the line, and picked up the Novice Cup. 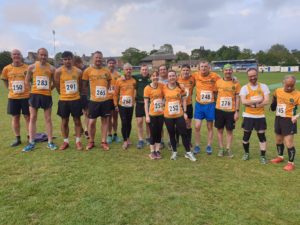