There’s no such thing as too much of a good thing. The weekend began with an evening at Syd’s with piles of pizza and plenty of Bass beer. We started as we meant to go on and we’d end up spending most of the weekend eating Syd out of house and home.

We made short shrift of our hangovers and rose early for a gentle jog to Penrith Parkrun where we were met by the man, landlord and legend himself – Syd Burns whose heart really is made of gold.

Syd was sporting his reasonably new Parkrun hi-viz, jacket looking very fine indeed – well, the clothes make the man as they say. Syd cheered us all on as we passed him three times on this two-lapper, flat and fairly fast course. Paul Stuart was first Strider home, followed by Nick, Jenny and then Richard Pegg.

We tried to rest our legs for the rest of the day but Nick sent us on a wild goose chase around Penrith which included a sharp climb up a big hill to the Penrith beacon tower. Like blinking idiots we followed him up there but the views at the top over the town and across the Lake District landscape were well worth it.

Carb-loaded from our hearty meals the Aggie (The Agricultural) pub the night before, we drove out to Haweswater Half HQ early on Sunday to the pretty village of Bampton. A quick change, warm-up and before we all knew it we were waiting with bated breath on the start line and then up the hills we all went towards Haweswater itself. Paul led the way but, playing fast and loose with his running kit, had to stop at the two mile mark to do up his shoe laces.

Anyway, all’s well that ends well – all four Striders each had a cracking run. No PBs or prizes but for goodness’ sake what’s not to love when there’s hot tea, good cake and good friends waiting for you at the finish line?!

Thanks again to our landlord and friend Syd Burns such a brilliant and memorable weekend. 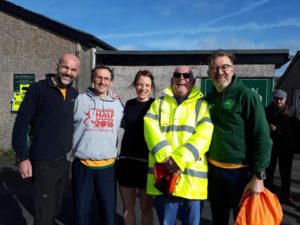