The notion of completing the Bob Graham round started about 10 years ago when training with Helen Cain for the Round Rotherham. We spoke about perhaps one day going for it but along came children and longer training days out were fewer and further between.

My husband took my last pregnancy as a great opportunity to get his training in to complete his round in 2017, so no pressure then. I did have the advantage of watching his training plan come together and about 6 months after having Charlotte I started running again. Every run I did had a purpose of getting me around the Bob Graham. On the Dark Peak Bob Graham weekend last year I arrived in camp Sunday morning to hear I had been volunteered by Adi to be one of the contenders for the 2019 round so there was no getting away from it now.

The weekend itself really couldn’t have gone better for me. The weeks leading up to it I had loads of people say they would support me including a good few Striders – Amy Duck, Andy Buck, Alasdair Menmuir, Matt Williams and John Rawlinson. I even had a couple of Mountain rescuers on 2 legs so, at least, I should get back if nothing else.

Normally there are 6 people on a Dark people weekend set off but unfortunately 2 contenders didn’t make the start but will be trying later on in the season. So at 18.45pm on the 21st June, on a 23 hour 30 minute schedule the other 4 of us set of with our teams heading for Skiddaw. The weather was perfect, sunny but not too hot, the views from the start were awesome and the company around was what it was all about. Adi, my husband, and Kris Groom calmed my nerves and started feeding me straight away. We were slightly up on schedule which meant we got to descend down Blencathra, on the Halls Fell route in the light, aided by my brother Mike. Into checkpoint one 10 minutes up, phew.

Quick turn around, bowl of curried lentils, new socks, new top and literally shoved out of camp, now 15 minutes up. Leg 2 was the Striders leg, Andy, Matt and Alasdair! We were joined by 2 of my brother’s friends too which made 5 supporting. All 4 contenders set off together with their teams and headed for Clough Head. A long steady climb meant we reached the first summit fine and then we were off over the Helvellyn range picking off summits with great navigation. We were making great progress.

The stars were out, the sun was setting behind us and by the end of the last summit it was starting to rise again in front of us. At 3am, because it was summer solstice, we were treated to an amazing display of a flare being set off on every Wainwright for injured @@@@and it felt we could see them all from where we were running.

Down into camp, more food, new socks and top, head torch taken off me, told off a bit for being up on schedule but it was a good feeling to have a bit of time in the bag for the longest leg ahead. Up Steel Fell with Chris and Brent, I was told we were not going to be making anymore time up on this leg as they didn’t want me to run out of steam and I was more than happy to go along with this advice as both my supporters had done this leg numerous times. By the time we got to the top, the sunrise was amazing. Small cloud inversions could be seen around us and we could see for miles. We couldn’t see any other contenders behind us but we continued making good progress. I had taken a nasty fall on Bowfell previously so once we were past this point I started to feel some relief. On to Scafell and once again my brother and his friend Donny appeared. We summited Scafell Pike and now for the choice of route. My brother had asked one of his climbing friends to throw a rope down Broad Crag for me and to be honest I wasn’t looking forward to it but then I wasn’t looking forward to Lord’s Rake so if I could make a bit of time on it let’s have a go. Much to my relief Chris had thrown the rope down the wrong bit so we pretty quickly decided Lord’s Rake it was. It was a long scramble up a scree run until we got to the top of Scafell and the last of leg 3.

Down into Wasdale, more curried lentils for breakfast and I was greeted by Amy with Betty, Jude and Simon. My brother and Donny decided to do leg 4 too and off we trotted to climb the renamed Yewbastard! Thanks Amy!! I think this was my only low bit but I knew it was going to come after such a long descent so I just tried to keep moving as Adi had told me to not stop moving for anything. After I ate my emergency SIS espresso flapjack bar I came around a bit and then started to tick off summits again. Simon led the way, Jude and Amy kept a careful eye on what I was eating. I remember Jude shouting Simon back as he had my food. The weather was still perfect and I really couldn’t believe that today was my day of having a go at this after thinking about it for so long. There were loads of people out that day and we were joined by more Dark Peakers which was such a spur on; new stories, new chat and new food!

I ate everything anyone gave me and always followed it with a drink of water or electrolytes to get it into my system. Great Gable was immense but I kept saying to myself don’t stop and then we were at the top, another tick in my head. Kris brought his son Max up to greet us on Grey Knots to bag some Wainwrights and then into Honister we went.

Big Bro changed my shoes and socks (think I could get used to this, talc was key here) Striders vest added. Adi had brought Ansel, my son, and my friends Shelley and Chris were there with Oli, their son. We had word that 2 contenders Jo and John had dropped out at Wasdale due to knee injury.

I was up 15 minutes and Loxely was down but still within grasp of coming in. After a bowl of Weetabix and banana we all set off: Hazel (my sister in law) with their 3 dogs, (who had driven around and crewed me); Dougal; Angus and Nell; Amy and Betty; Simon carried on; Alastair and Chris rejoined; Wendy and a few others joined who fancied a nice run in the sun. Ansel my son and Oil stormed it to the top of Dale Head so fast I was worried we lost them and off we went to finish the last 3 Wainwrights.

Of the round the last peak is Robinson ( my maiden name so quite special). I lost a bit of time coming down Robinson as I got a slight bit crag bound and had swapped my mudclaws too early I think, at Honister. I couldn’t believe the amount of people around me, it was a bit overwhelming but really enjoyed the great company and smiles which kept me going. John Rawlinson joined us at Newlands which I was so happy about as he had helped driving everyone around all day and night (thank you!). Michael and Donny popped up again and off to Keswick it was. I was still so worried that the wheels would come off at any moment that I kept eating and drinking all the way. We took the trail route which added a bit of time but everyone seemed happy by the choice.

We arrived into Keswick to be greeted by loads of friends and family, Ansel ran the last bit up the high street to arrive bang on schedule 23 hours 29 minutes! Loxely made amazing time on his last leg and came in with a whole 6 minutes to spare!!

Now for the most important bit.. I only managed 3 pints afterwards. Charlotte my daughter was under the weather so was a permanent fixture for the rest of the evening. Mum mode kicked in and I found myself shopping for Calpol in Booths straight after. Muddy Ruddings was full of wonderful people in the evening and was sorry to have to leave early but not too sorry when I realised I could have a bed back at my brother’s and not have to camp in a cramped 3 man tent.

The whole experience was just amazing and I would say to anyone if they are fancying it to go for it. It would not have been possible without so many people who I will be forever grateful too. I hope I can repay many of those favours in the future. 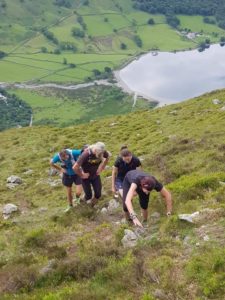 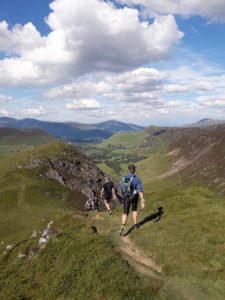 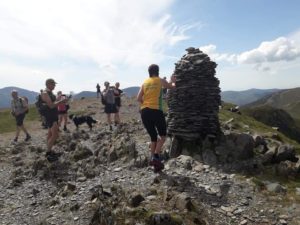 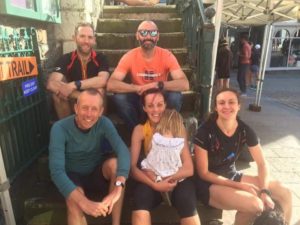