It’s grim up north  annual visit to the seaside starting out from the sea front at Hornsea, the race provides a great fast and flat out and back on the Trans Pennine Trail. A choice of six different distances are available from 5k up to full marathon.

With my in-laws caravan sited 4 miles from Hornsea seafront I thought it would be great to do the 10k as part of my 10k a month challenge and to make a weekend of it.

Having travelled down on Saturday with the family I was very good in the club at night sticking to drinking pop although the full pizza might not have been the ideal choice of food.

I woke up early Sunday (race day) bit tired due to a late night but was ready to go, the race didn’t start till 12 so we went for a walk around the car boot sale and market on the caravan site first.

We then set off and arrived with an hour and half to spare so just saw the start of the half marathon. I did a little mile warm up with my 7 year old daughter and collected my number.

At 11:50 it was time for the race briefing we then lined up on the sea front for the start. A count down from 10 and we were off up a little road then a left turn on to the Trans Pennine Trail.

My main aim for this race was to enjoy it as I feel I have been struggling in past few months.

I settled down to a steady pace we came to a road which we had to cross the lights were on amber so i sprinted across then it was back on to the trail.

At 2 mile I started with a pain in my stomach but carried on at a steady pace. We reached the water station just before 3 mile so stopped for water then carried on up the trail until we reached a Steward who told us to turn around a glance at my watch showed it was short of 5k.

The heat had picked up now so I stopped at the water station again.  I still had a pain in my stomach and by mile 4 it had worsened so I decided to walk a little, did this for about half a mile then got back in to a steady run.

With a mile to go I decided to go for it as I really wanted to be under the hour.

I reached the end of the trail and managed a sprint down the road to the finish line.  It was only then I realised how short of 10k it was but i was happy with my run and had enjoyed it.

The goody table was very impressive; it had a bucket full of chocolate bars numerous cans and bottles of cider and 3 tables of cakes and buns was like the British bake off.

I thought I was a lone strider as never saw any other gold and green but after seeing results a David Hewitt ran the half marathon and finished 25th in a time of 02:06:58.

First home in the Half Marathon was Tom Mullen (Bridlington Road Runners) in 01:30:28 with Jody Hoeth (unattached) first woman home in 01:55:47.

The (.pdf) results are here  … and the Strider results: 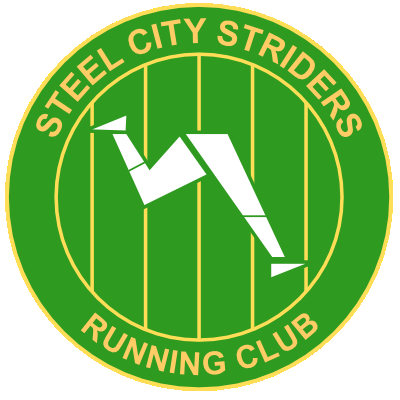