It was 16 months since the first Katie Bell race in May 2018, which was the beginning of the heat wave – this time, 8 September,  the weather conditions were much more pleasant for running. There was quite a few Striders in attendance, most of whom were outside the café or in the toilet queue when I arrived, so once everyone had been to the loo, we wandered over to listen to the introductory talk at the start area. Proceeds were going to the Altzheimers Society this year.

This 7.5k race is a good one for those wanting to move up from parkruns, as it’s a familiar local  route through Millhouses Park and Hutcliffe woods, and it attracts a wide range of runners, from speedy to walkers with sticks, and has friendly encouraging marshalls, including a scout group. So it’s a good one to encourage your friends/ family to try as a next step up from 5k. It’s half path, half trail, a little bit undulating just to make it interesting, and you get a medal, a skinny beer, some vouchers and some sort of poncho in a bag.

We started in the park, on the flat, and as usual I started off feeling like I was keeping up with other people I knew, but then they all overtook me on the hill up to the woods!  I knew I could beat last year’s time – although I would have quite liked to come in more like PB parkrun and a half,  but  I was happy enough with 5 minutes better than last year.

There were prizes for top three male and female runners, and Robert Bishop, a Strider, came in second overall on 29.01 with a great run.

The list below is put together from results and photos, so I may have missed Striders if they weren’t in their Strider tops, and I didn’t know them by sight. There were around 170 finishers.
(There is a photo of the full race results on Katie Bell’s Facebook page.)

Two photos – the start… and the end! 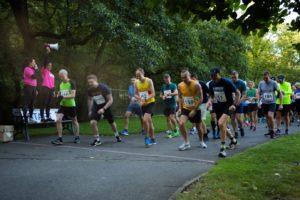 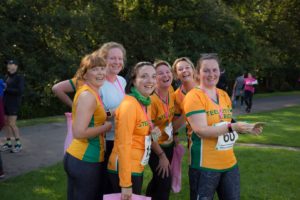