The Lairig Ghru (Scottish Gaelic: Làirig Dhrù) is one of the best-known mountain passes in Scotland. It runs through the Cairngorms of Scotland and rises to a height of 835 metres. The route and mountain pass lie on the Mar Lodge estate on Royal Deeside to the East and the Rothiemurchus estate to the West. In truth the route begins at the site of the old police station in Braemar (Now the village hall) in Deeside to the police station in Aviemore in Speyside, total distance recording approximately 43 Km.

This race (organised by the Deeside runners to raise funds for Cairngorm Mountain rescue) had a special significance for me; having holidayed in the Cairngorms with family and friends regularly from a much younger age I have grown to love and respect the remote wilderness and beauty of this particular mountain range, and have long held an ambition to walk never mind run through this mountain pass.

Having stayed overnight in Braemar Youth Hostel we awoke to a calm morning in the Glen with the race registration taking place inside the village hall from 8:15 am. It was the first time I have ever had my bag checked for safety kit; (including trail marathons in Glen Coe) which was a ‘gulp’ moment.

The race started at around 10am and for the first 5Km followed the tarmacked road South-East to towards the Linn of Dee (well worth a visit if making a weekend of it). It was here I had my first accident, with the entire contents of my camel back emptied onto my emergency kit (how this happened I do not know) and consequently relied heavily on the hydration reserves of my good friend and fellow Strider Kevin Firth to prevent an early exit.

The trail then turned right and across Victoria bridge at Mar Lodge estate where the train of runners were greeted by a family of pipers playing a medley of famous Scottish tunes.

The Linn of Dee

Thereafter the trail aspect of the race kicked in with a relatively straightforward undulating stretch over moorland via Glen Lui (although some runners had already managed to tumble by this point) until around 14 Km at the now abandoned Derry Lodge at the foot of Glen Derry. (There was an added pressure of runners having to meeting a cut off of 1 hour 30 minutes or to be returned in shame via Land Rover to Braemar!). Fortunately, we were in good time and arrived at around 1 hour 15 minutes with plenty to spare. 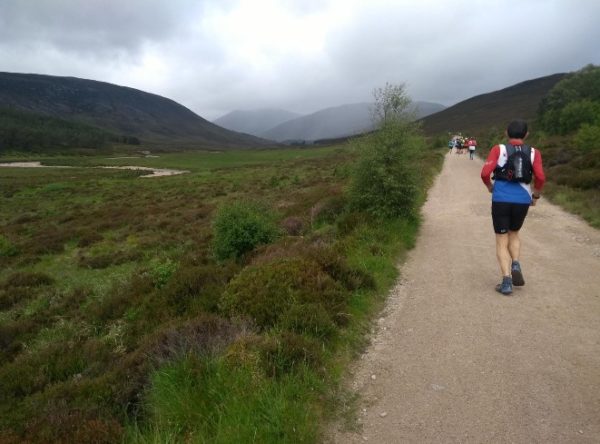 A short distance further on we had to negotiate crossing the Luibig burn, with many runners misplacing their footing resulting with a dip in the cooling, fast flowing waters.

Moreover, the trail became rougher and less defined as it climbed higher into the mountain range; the going was now getting tough with some sections only suitable for fast walking mixed between running efforts. Many rocks of different shapes and size lay in our path which certainly cranked up the technical nature of this event. The scenery was stunning in the brief moments one had to glance up at the grandeur and majesty of first ‘The Devils Point’ (with the diminutive structure of the essential Corrour Bothy below) climbing up between Braeirach on the left with the permanent patches of snow on its East side and Ben Macdui on the right (the 3rd and 2nd highest mountains in the UK) the glaciated valley announced itself in all its mysterious glory.

The trail up through the bottom of the Lairig Ghru

As we reached the top of the pass and the pools of Dee (close to the source of the river Dee that flows out to sea from Aberdeen) the weather turned with rain and wind driving across from the left briefly for extra fun in which lay a boulder field of the technical magnitude even the hardiest of fell runners can dream of. The pace now slowed down to a hoppy kind of walk as we did our best to avoid turning our body parts. 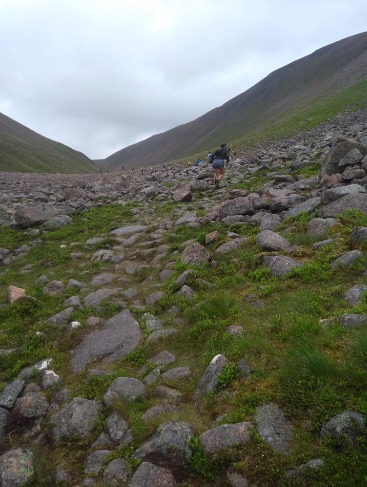 Once safely negotiated; (relatively anyway) the route descended quite rapidly into the dense, tranquil Rothiemurchus forest which is populated beautiful by Scots Pines in between hard-packed trails. By now I was really feeling the going tough, as Jaffa cakes and strict juice rationing can only take you so far.

The final 3 Km trundle into Aviemore had me thinking more in terms of the last mile or so of a road marathon when you are ‘dead on your legs and willing yourself to the finish’; however, I made it over the line in just over 5 hours and 16 minutes, with Kevin crossing the line a few seconds in front.

We were the only Striders taking part this year as this race sells out within minutes with only 250 places available, (with a waiting list almost as long) however it was a real privilege to compete and to experience such a wild, unforgiving yet beautiful environment.

Undoubtedly, I will be back again at some point, however the race was won by Jonathon Crickmore (3:02:41). The first lady back was Kerry Prise (3:42:28). 237 runners took part and deserve immense credit for their efforts. Many thanks to Andy Bain at Deeside Runners and to the volunteers who helped facilitate and support this magnificent event. 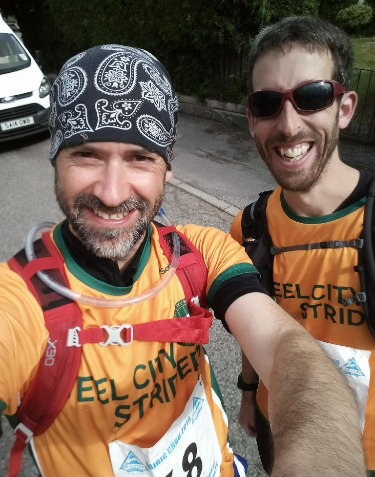