This is one of the most scenic marathons in the UK. It’s a challenging trail over varied terrain in one of the most beautiful areas of the UK. It circumnavigates Coniston Water starting at the showground about a mile south of Coniston itself on the western side of the lake. There had been heavy rain the day before but at 15 C it felt surprisingly warm. I entered this race as training for the Lakeland Five Passes Ultra on 15 June because the terrain is similar though the elevation of this race is much less than the Five Passes.

Lakeland Trails run a series of races from 5k to 100k throughout the year. They promote Inov-8 products and there was an offer to try on one of their new trail shoe ranges for the race. I didn’t take up this offer but I was tempted. I was worried about trying out new shoes that I had not worn before. Still, it is a great idea. There were plenty of stalls selling coffee and burgers including veggie options. Registration was easy and information leading up to the race had been efficient.

I met another Strider, Mark James, and we had a good chat at the start. The race started at 9 am with over 200 runners. The best thing for me about any long race is that you get to talk to other like-minded people. The route set off to the north along tracks and paths and took the runners onto country lanes for short sections. Some bits had to be walked. We then curved round to the east and headed south back towards the lake. There was a loop of a small tarn and then the trail followed dirt roads until the terrain got very rugged. This was especially true when the trail swung back round to follow the western side of the lake again.

Though it wasn’t a hot day, I was glad that I carried 2 litres of drink. Aid stations were about 5 miles apart but I always feel the need to drink regularly. I chose soft muesli bars and dried apricots to eat on the way.

The last 8 or so miles had some boggy sections and I seemed to find all the mud. With about two miles to go, I tripped and ripped the top of my shoe open from the toe which was a first.

I was very pleased with my time of 4:56:58. Mark James finished in 5:31:54. In first place was Joel Jameson for Team Jameson in 3:03:20 and first lady was Katherine Klunder at 3:58:10 for Chorley Athletic and Triathlon Club. It’s definitely one for next year. 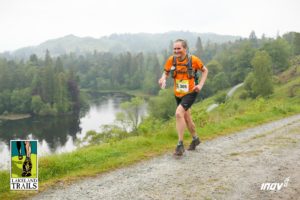