My March 10k took me to the beautiful village of Langsett on the outskirts of the Peak District. The race itself was described as “a race that will twist and wind you through some beautiful forest hard packed trails, followed by some nice climbs with a fantastic downhill to the finish”. So I knew it was not going to be your bog standard road race but I didn’t expect anything as extreme and brutal as this.

It didn’t get off to a great start as the closest we could park to the start was over a mile away so a steady jog was needed from the car to the starting point where I collected my number; we were also given a free keyring and a cake bar which was very nice. I got a bit concerned while waiting for my number as some runners were wearing backpacks and had gels and equipment but I found out that they were doing a half marathon. We gathered at the start line which was in Langsett Woods carpark and had a chat and photo with other Striders, then we were off It was a slow start trying to find space to run but I soon got in to the rhythm, the first mile was what i had expected nice trail paths through the woods, we then dropped down in to a valley and that’s where things changed. The saying is “things went downhill” but this certainly should have been the opposite as things went uphill very steeply and very rocky, the climbs went on for around 1 mile and I was constantly checking my footing the whole way up.

Once we reached the top the views were stunning over looking the reservoir but it was hard to appreciate as you had to look where you were running. I saw at least 2 people fall on the rocky paths. Luckily they were ok and carried on but it was at this point I forgot about a PB and just wanted to reach the finish line alive and injury free. We continued over the moors then finally came to a downhill section but it was still tricky to navigate around rocks and rough ground. I heard another runner say to me she felt like a goat. We then headed back in to the woods and a bit more climbing then a small section of road up a hill and back down other side (I’m guessing this is what they meant by downhill finish) although it wasn’t the finish as we still had a left turn back in to woods then a sharp right turn and a little steep hill to the finish line where we received water and a medal.

That was my first experience of fell running and although it was hard I really enjoyed it.

168 started the race including 4 Striders that i know of but there could have also been a lady Strider though I’m not sure who. [Edit: It was Glennis Chappell]

The winner of the race was Gareth Knight in 47.47, and first female home was Lucy Docherty in 50.26

Striders were as follows: 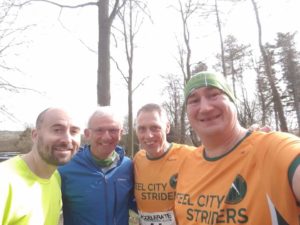