The Leeds 10k is where the “Run For All” concept all began, the original legacy of the late Jane Tomlinson (there are now over 20 events in the Run For All annual calendar taking place all around the country). It’s a brilliantly inclusive event that attracts over 5,000 runners. It’s a flat and pretty fast route, looping around the city centre and along (the not particularly picturesque, but lined with supporters) Kirkstall Road and back.
This was my first Leeds 10k and also my first race in green and gold since joining the Striders at the end of May this year. There weren’t a huge number of us there, and I was feeling the pressure to do my new club proud. I’m the kind of person that gets embarrassingly overwhelmed at any sort of collective endeavour, so I had a little emotional moment at the start line and then I was off! I stuck with 60 minute pacer Nick around the first few km through the centre and we had a laugh when he chivvied us all up what Leeds has the audacity to call a “hill” from the Cockpit club up to the train station.
Out onto Kirkstall Road where the majority of the race took place and once I hit about 3.5km I started to see the speedy folk pelting back into town. People watching is one of my favourite things so the next few kms went by really quickly as I shrieked “Go Strider!” at my few fellow members (shout out to Tony who was taking photos of the event in his vest and who really spurred me on!) and basically found any excuse I could to clap and cheer for others too. Apologies to anyone who was running near me whose ears I made ring!
Race conditions were hot and still, with plenty of sunshine and not much shade, which began to get to me a little from around 7km onwards and I started to lose sight of Nick’s bobbing 60 minute flag. It was at this stage where I really noticed the difference being a Strider has brought to my running – the social element and having a chat on the way around is something I value so highly, and I was struggling without having somebody there to talk to (can you tell I’m not a seasoned racer?!). As my legs started to feel like somebody had somehow snuck a load of concrete into my thighs, I fell into step alongside a couple of women from Roundhay Runners who were feeling similar to me, and as we exchanged words of encouragement they got me back going again. The running community is a beautiful thing, isn’t it?
I completed the 5-10k progression course up at Millhouses early this year with the aim of making 10k feel less like a “scary” distance, and it absolutely worked. So a big thank you to all of the course leaders who took the time to help me find a love of running! In what felt like no time at all I was back on the Headrow and managed to find a last little bit of energy to pick up the pace over the final 400m. Whilst I missed my overall goal of an hour by a smidgen over a minute, I was over the moon as I finished – I still managed to knock over 2 minutes off my previous personal best, and most of all I felt like “A Runner” for the first time.
First man was Scott Hinchcliffe (unattached) in 31:29
First lady was Nik Tarrega (unattached) in 38:06
And first Strider was Alex Mee in a time of 39:04, closely followed by Ashleigh Barron who was 5th lady overall!
Full results are available at https://www.chiptiming.co.uk/events/asda-foundation-leeds-10k-2019/?
*I took part in Leeds 10k as part of a cumulative challenge called Running Down Dementia, in which I’m aiming to run 222km between April and the end of August to raise money for Alzheimer’s Research UK. If anyone would like to take a peek at my progress please visit https://runningdowndementia2019.everydayhero.com/uk/laurara31 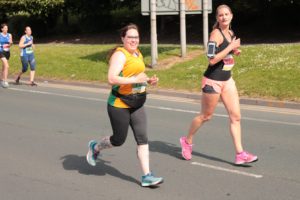