Whilst the masses went off to run up some hill in Holymoorside, a few of us didn’t get the memo and went to run up some other hill in Leeds with 5800 others (was strange being in the minority). If you haven’t ran the course before, the profile is very similar to the Sheffield half, with a climb dominating the first half and a descent the second half, albeit with slightly less gradients than Sheffield in both directions.

For me the day started late just through pure laziness and after setting off and hitting the M1, I soon realised I’d left my number at home (d’oh) so a quick detour back home meant I was well and truly behind schedule. On arrival at Leeds I then found the car park I’d singled out closed. After driving aimlessly for a bit I managed to find an alternative and, with a longer walk than planned, got to the baggage drop with 2 minutes to go before the mass warm up (some might call it perfect timing)

After a brief chat with fellow strider Matt Connell on the start line and then a sudden realisation that I had no clue what car park I’d actually parked in, my thoughts were interrupted by the count down and we were off. Big crowds lined the streets at the start and, carried on this wave, the relatively flat first few km passed without much note apart from a steel band playing us on our way.

By the first real climb at km 5 I’d settled into a nice little group going about the same pace, but when we turned the corner to the steep part the Sheffieldness came through and by the top, 2km later, (where there was another huge crowd) our little group had been whittled down to just two.

I was glad of the company for the next 3km, using one lane of an otherwise open dual carriageway didn’t appeal much to supporters so could have been a pretty lonely section otherwise. The next couple of km saw us zigzagging our way through a housing estate and some more large crowds. By the time we turned for home and the final 7km the sun had come out, the temperature had soared and we were seeking any bit of shade we could on the way back.

It turned out the lady I’d found myself running with was from local club Horsforth Harriers and, with her being 3rd female on the road too, I was beginning to know what it must have felt like to be a non-Strider at the Sheffield Half where everyone in the crowd was cheering for someone else. After 15km of this, I decided the only way to get any respite was to let her go ahead (had nothing to do with her being faster, honest).

The majority of the way back was downhill and, now running alone, there were some more crowds and a couple of choirs to keep me going, as well as the beautiful Kirkstall Abbey to run past.

I managed to hold on better than I did at Sheffield and only really struggled in the last km when even the noise of the huge crowd along The Headrow couldn’t help me find any extra speed. Spotting the gantry I thought the end was in sight only to find out I’d been fooled by the start line. After running through the start there was one final turn and a last 200m uphill to the finish (why do they do this to us, or more to the point why do we do this to ourselves?).

In all, the hills and the sun made for a difficult but enjoyable morning. I was pretty happy to finish in 1:27:01 (well apart from the “01”, I mean really?) only 30 seconds short of my HM pb and 2:30 quicker than Sheffield last month.

I managed to have a chat with a few of the other Striders who’d chosen the Leeds hills instead of Holymoorside. Matt had a great run in 1:25:03 despite fuelling on meatballs the night before which turned out to be a mistake. His quote at the finish of feeling like hundreds of people overtook him in the second half was a slight exaggeration as he finished a brilliant 90th.

There were brilliant performances from all 15 Striders including Marcus Dearns on his Striders half marathon debut. The green and gold vest giving him a full 30 second advantage over his pre-Striders Sheffield time from last month. There were further sub-90 times from Nick Scarlett and Russell Jones-Davies.

Jenny Stuart was impressive as first female Strider and 16th overall female. Heidi Hargreaves ran a pb of 2:09:15 on the back of no training and the equally undertrained Alex Mee claimed it was the toughest half marathon course he’s ran.

There were a few ailments in the striders ranks with Paddy Treehowes suffering blisters and Gary Roche’s body falling apart gradually over the last 5 miles with his knee, hip and calves giving him trouble but still finding the grit to finish before vowing to never run again (don’t think that’ll last long).

The full results are here .

NOTE:  This table is extracted from the latest (14th May) published results 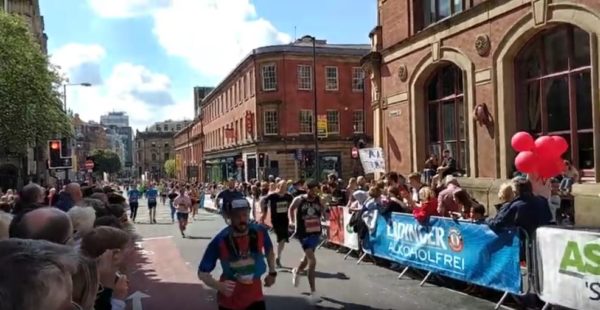