This is what my teaching mentor, the wonderful Sybil Cartwright, likened to a ’vinegar trip’ – a great day out, as much to do with the peripheral fun as it is with the stated purpose of the trip.

When you first introduce a pupil to the use of simile, perhaps through Rihanna’s ‘shine bright, like a diamond’, they are prone to run away with the idea and their compositions read like a current bun of idea expansion. So, like a novice writer…

As the sun rose over Tibshelf seventy plus Steel City Striders, feasting on early morning flasks and handy-pots of instant porridge, and rubbing their eyes against the early morning as if they were all allergic to travelling out of county, went off to the first fixture in the 2019 Road Race Championship. A combination of ideas and planning by a slightly naïve, but highly regarded, team of organisers put us on two coaches to Prestwold Hall (midway between Leek and Uttoxeter if you aren’t sure and can be hoodwinked) with discounted entry to the race.

The race itself was a little boring and dull for many (or possibly most). The route was as flat as a Staffordshire Oatcake (thanks TH) or VB herself, and Tom Brookes suggested it was, ‘greyer and more repetitive than those ghastly ’50 Shades’ books’. The Strava trace is akin to a plate of spaghetti, tbh. The elevation gain is measured in feet rather than metres because the change is so little. Some see this as a good thing of course.

There was a dearth of spectators, unsurprisingly, as neither of the villages we ran through (Wymeswold and Hoton) has more than 150 residents. Those spectators there were on the course were able to see runners multiple times as the route double, treble and quadruple backed on itself. It made for easy photo opportunities, though the over-keen lad who kept getting in the way of our own nominated Club photographer for the day, Laura Greaves (How she also got a race time I do not know!) was acting like a beach bather with a modesty towel flapping in the wind.

The surface was not as good or as consistent as the speed kings and queens would like; it was described by Regan as ‘like running on Portsmouth beach’. There was tarmac, concrete slabs, dust, pebbles (God – the pebbles!), a few weeds, a farmer’s track, pot holes (so frequent they brought back memories of Sheffield streets of old), cracks, gravel and loose bits. Not needing trail shoes exactly but not what you might expect on a road race.

There are races on race tracks – Donnington has one, and we had a race report recently from Daytona. You can start and race and finish on a go-kart track in Wombwell and run a 10k on the raceway at Croft. But this has 12 km on runways and taxi-ways. Imagine swinging round a bend onto a wide-open six-lane highway with a fair breeze blowing into your face. What do you do? Where do you shelter? What racing line do you take?

Race conditions were good, despite the breeze building from ‘light to moderate’ as they say on the Shipping Forecast. The sun was out, and the temperature as mild as Britain’s favourite, a Chicken Korma. So favourable, in fact, that that fashion mistake, the arm warmer, was discarded after just 400 metres by one Strider. No-one else seemed as cold as Nicola Ross on the coach home – she’d emptied the flask too soon.

Lots of effort was put in, with some running like kids spilling out of school at the end of term. At least twenty Striders achieved new distance personal bests ‘of all time’ according to their Power of Ten histories. These successes ranged from a slender 16 seconds to an enormous 14 minutes!

Readers might wonder how the event scored so highly on the Runners’ Rating. Here’s how:

We had a de-brief in a ‘Spoons once back in the Steel City. Those who had said ‘never again’ were already coming round to the idea of organising another coach trip to a later round of the Road Race Championship, proving it has really taken off well; VTOL in places.

Alex Green will be updating his charts, graphs and spreadsheets. Arif and Frances will be working out how their chips didn’t register a finish. Poppy will wonder how hers did.

The race results seem rather immaterial, because that turned out not to be the point for most of us. A terrific day out.

The overall winner was Nick Samuels of Sales Harriers & Loughborough Students in 01:11:54, with first female Samantha Harrison of Notts AC in 01:21:14. Striders’ results as follows: 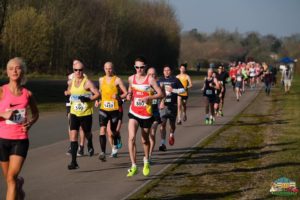 James Rose and Hal Roberts chase the lead female, about 2 kilometres in, just after the passing the random, mysterious, Saxophonist for the first time. 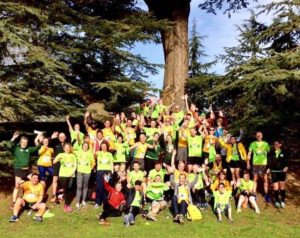 Striders – Assemble! (Hanging from trees and everything)