With a reputation for grim weather, Stamford has been a hunting ground for many Striders over the years, mostly en-route to a spring marathon. It gives a good pointer to marathon form whilst its quirky distance and undulating nature mean that, if it does goes wrong, it doesn’t really count when ranged up against more traditional distances. Today the weather was an unseasonably warm 12 degrees but this was offset by strong southerly winds, beguiling and supportive on the way out but spiteful and disruptive on the return.

Sian Elizabeth, completing this event for the fifth time, was third lady with a personal best of 2:06:39. A meaningless time perhaps but in the context of her marathon ambitions an important marker and Sian is obviously in a run of form as she ran a pb and equalled the club 10k record last week at Scunthorpe. 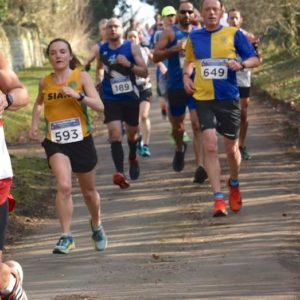 Sian flying down the hill at 3km. The problem is, you have to go back up at 26km.

And our other Strider? Well, his pb’s were set so long ago that they don’t even appear on Power of Ten and are now meaningless; cherished by the individual but oh so boring when rattled out again and again in self-defence  when confronted by yet another average performance. Toni Minicello once remarked how older athletes are fighting to stand still, running up the down escalator so to speak. Keenly observed but it doesn’t seem to help. 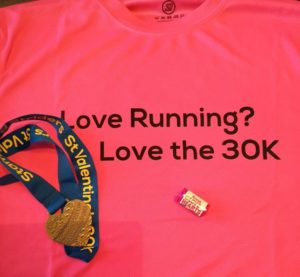 The Stamford 30k is renowned for its splendid coloured t-shirts. Recent years have included canary yellow, bottle green and last year the sort of grey your whites go when not sorted properly. As you can see, Stamford Striders have excelled themselves in 2019.

Is Sian’s time a club record? Who knows, and is it important given that few other Striders ever run the distance, but given the current predilection for doling out certificates for obscure events then perhaps worth investigating. A couple of almost certain 30k club records are to be uncovered however as they still remain as course records. Back in 2003 Mary Picksley, who owns a whole tranche of our own club records, ran 2:17:33 as an F50 whilst John Kerr, who also holds so many of our club records, ran 1:45:58 as an M45 as long ago as 1998. Mary would have placed in the top 100 today whilst John would have come second.

The ladies event was won in 2:03:38 by Jordan Foster, Nene Valley Harriers. The first man, David Hudson, BRJ Huntingdon, ran 1:44:36 ahead of another sell out field of 623. Link to results attached Stamford 30k 2019 results

And the moral of the tale might be to look after your pb’s as you don’t known when it be your last.

Postscript: almost to prove my point, since penning this report it turns out that Mary’s course record fell to Christine Heaton (Holme Pierrepoint) who ran a sparkling 2:15:04.