I went over the Pennines to Cheshire to visit with family and friends at Xmas time. On Boxing Day I went with my brother Mark to run the Leyland Boxing Day 10km. Interesting to return to this part of the world as I lived in Preston 1985-90.

The race was on an undulating course in and around Worden Par. Apart from a nasty uphill just before the end there were no hills that would worry a runner from Sheffield. A cold, windy morning but we finished just before it started to rain.

Officially I finished 111th out of 451 in 48.41 (clock) 48.27 (chip), a little bit slower than the Percy Pud. I ran most of the race with my brother Mark, he finished just ahead of me but the results put him in 112th? I was not impressed with the organisation of this event, there was a dangerous out and back section between 1-2 miles on a fairly narrow road, suddenly having fast runners zooming towards you made overtaking a somewhat risky proposition! There was no 5 mile marker and the finish line wasn’t obvious until you were almost there. If you give the Percy Pud organisation 10/10 I give this one 4/10, it was good to have a social run round with my brother but I don’t think I will do this race again.

Photo shows me with my brother after the race. 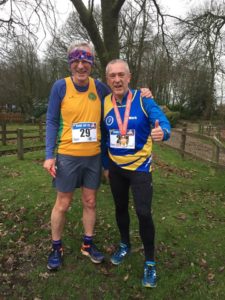