And so, to Lisbon, Portugal’s historic, hilly and coastal capital. It was a great opportunity to catch up with my friends, Simon and Paula, who are settled there with their handsome sons, Lucas and Samuel. I’m there to run the Meia Maratona, one of Europe’s fastest and biggest Half Marathons, as part of my family’s charity fundraising for Sixty4Judy, with the added attraction that it includes a starting section across the River Tagus aboard the remarkable 25 de Abril Bridge.

The weather was unseasonably hot on my arrival in the city and Paula, who was running her first Half Marathon with me, was praying for at least some cloud cover. Fortunately, by Sunday morning, the odd stray cloud had appeared as we waited to board the train that would take us over the bridge to the start. The sight of it pulling in to the station, crammed to the rafters with hundreds of athletes, was quite something and we piled aboard. For 20 minutes we were as crushed as Lisbon sardinhas in a can. Thankfully, the buoyant atmosphere took our minds off any concerns for health and safety.

The relief of escape from the train was palpable and we burst onto the platform before walking to the start in the faint shadow of the enormous Christ The King monument that overlooks the city. It was an appropriately Biblical scene with 15,000 people gathered for the start. What an atmosphere they created! At one point, the crowd parted and applauded as the Portuguese commandos arrived ready to run in kit and boots. I didn’t envy them.

In minutes we were off and over the bridge, with barely enough space for elbows. I weaved in and out as best I could and it was still crowded as we left the bridge over 2k later and looped around to hit the coast. It was the busiest race I’ve ever experienced, with runners from all over Europe, and space was at a premium. The long and straight coastal stretch, first towards the city, and then turning back towards Cascais, before a final turn, in truth lacks a bit of variety. But it had heat aplenty. By 15k I was feeling it and taking on fluids at every opportunity. My legs were stiff and sore as I gratefully entered the final stretch in beautiful Belem and a finish in front of the palace. 1:55:48 was my best Half Marathon time yet, though I’d finished poorly. I’d hoped for slightly better, but the heat, crowds and wine of the last few days put paid to that. Paula finished in around 2:18, a great effort. Apparently, Callum Hawkins struggled and blamed the heat and headwind, so I’m claiming that too.

It was wonderful to be back in Lisbon, however tinged with sadness at the absence of my wonderful wife and companion, Judith. I carry the weight of her loss into every race. Judith might have been an atheist, but I like to think she was perched up there on Christ’s shoulder, taking in the glorious view before deciding the time was right to sample the local wine. She really knew how to live. God bless her.

You can read more about our 60-race challenge and charity fundraising at sixty4judy.home.blog

The race was won by Ethiopia’s Mosinet Geremew in 59:35. First female was Vivian Jepkemoi Cheruiyot in 1:06:33. 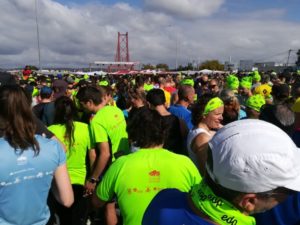 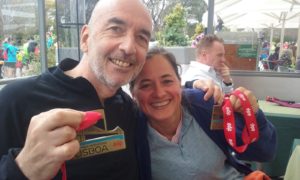