When you reach 50 you expect to receive a special present. Nick said “I’ll pay for you to go anywhere in the world but you’ve got to run a marathon”. With a glass of wine in hand I replied “of course”. After some thought I chose Copenhagen. My uncle had lived in Denmark and I’ve been there several times plus …. it is flat.
One problem. I’d never run further than a half marathon and that had not been fun. I like Park Runs. Nick decided that a long period of training was required, so in October I started to train with the marathon in mind. Nick suggested the Peter principle …. run and then run more. I completed cross country and started to build up my mileage and the number of days per week that I ran. 40 miles and 6 days of training per week became the norm. I started to push up my longest run to 15-16 miles.
Then disaster struck. My aging body decided that this wasn’t fun and a quad injury hit. I had to pull out of the East Hull 20 and visit the physio. Two weeks of inactivity, exercises and frustration passed. It was at this point that I realised Nick was a genius. His suggestion of a long training period meant that I could pull back without too much panic. He then took me for a week’s holiday in Majorca. It was very generous of him until I realised that I had paid for it and he expected me to run twice a day.
The trip arrived. Copenhagen is a wonderful City. We arrived on Friday, visited the Expo on Saturday and the race was here. We took two friends with us who couldn’t believe that doing the tourist sites on Saturday was not on my agenda; feet up, rest up! 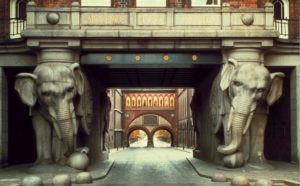 Not even a brewery tour could prevent Louise from putting her feet up.

The race start was close to our hotel. Porridge for breakfast and off to the start on a crammed street on the waterfront. I started well. Nick popped up at 8 miles and I was thinking that marathon’s are easy. Oh dear, toilet stop needed and by half way I was not feeling good. (All the best athletes, Steve Jones, Paula Radcliffe and Dave Campbell have featured unscheduled toilet breaks at some stage in their careers. Ed.) The sun came out, the temperature rose and I was getting fried! I buckled down, slowed down and tried to keep going as those around me wilted in the heat. I saw Nick again enjoying himself dancing to an all girl Oompah Band. He shouted something as I passed 20 miles and I knew that I could make it. Pete Pfitzinger would be saying “the race begins at 20 miles”. Here I was and there was 6 miles to go.
I started clock watching. I knew that I was close to 5 hours and I actually started running quicker for the last couple of miles and there were runners all over the road. I strode on and kept going to the end. 23 seconds over 5 hours. I collected my medal and found Nick and my friends. I then had to walk over a mile back to the hotel. The biggest pain was Nick who reminded me about the 23 seconds! Ten days later and I’m still wearing the medal. Very proud. I’d never run 5 years ago and 7 months ago I set off on this crazy journey. The marathon organisation was superb, the app is good and it is flat.
I’m really proud that I got round and I ran it all. If I can do a marathon then anyone can. My advice to anyone is find a coach, follow a schedule, take a long approach and listen to Pfitzinger. He does have some pearls of wisdom on the subject.
Will I do one again? Not sure. It depends on where I can get Nick to take me next time. I finished the race and he had to pay for the whole trip. Copenhagen isn’t the cheap city and I have expensive tastes. (Tokyo is expensive, start training now to get the qualifying time. Ed.) 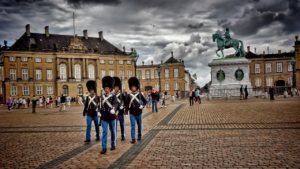 Copenhagen itself is far more than Carlsberg and Mermaids with castles, culture, museums and much, much, more. This is the Amielnborg Palace, home to the Danish Royal family with changing of the guard every day at 12 noon.