I had been considering a Marathon in Europe for a while now and the date of this one fitted in perfectly with a week-long break over the May bank holiday.

We had spent the week before in Northern France and the Black Forest, probably eating too much French cheese, drinking too much red wine and walking in the mountains. I’ve never been to Luxembourg before but imagined that its gentle rolling terrain and weather would be very similar to the UK and therefore the training I’d done around Derwent would stand me in very good stead for the possibility of a near PB.

Approximately 15,000 runners took part in the full and half marathons and with both sets of runners grouped together; it made for some interesting manoeuvring over the first 7 or 8 miles. Starting a few miles out of town at 7pm to avoid the heat of the day (still 27 degrees) the race soon winds around the narrow streets and alleys of the old town; passing countless Samba bands, singers, even a group of Alpine Horn players! The event is well supported throughout the route by an estimated crowd of 150,000 people, being particularly rowdy as you pass through the beer gardens. The route also runs along the spectacular split level Adolphe bridge which offers incredible city views and a preview of the valley 100ft below that you will soon be running through. Once down in the lantern lit valley (by this time it’s dark) you have the option for a friend to run with you, carrying a candle flame lantern, presumably to offer you moral support or perhaps to gloat a little that you still have a long way to go! All this for a 5 euro donation to a children’s charity.

The route then climbs back out the valley and continues a steady climb for the remaining 6 miles leaving the busy city, out towards the quieter business district and the finish. By this time its 11:30pm at night and many of the volunteers are beginning to pack up for the night. It would appear that the majority of local runners either run the half marathon or a relay leg of the marathon so that it doesn’t significantly impact on their drinking time!  Some of the latter sections of the route were also poorly lit and I was glad of my night-time head torch training although unfortunately this time it was without the head torch!

For the final 2.5km of the race, a friend again has the option to run with you (for another charity donation), presumably to hold the torch and map and to take a disproportionate amount of the credit as you go over the finish line together!

Would I go back to Luxembourg again? Yes, it’s a lovely place to go for a city break, cheap flights from UK airports and free public transport travel across the city during the Marathon weekend.

Is it the best supported Marathon and atmosphere I’ve experienced? Yes!

Am I pleased that I finished the Marathon? Yes.

Did I set off too quickly for the weather conditions and then regret it for the next 15 miles? Yes!

Did I question why I run Marathons and why I like running? Yes!

Would I do the Marathon again? Probably not but I would strongly recommend the half marathon so that you have time to get back to a bar, soak up the party atmosphere and watch the other poor souls finishing the marathon.

The Cost for full marathon was 52 euros and then you have the choice to pay extra for t-shirts, engraving, etc. 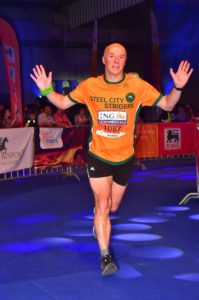