Maltby Memorial is a 10k race, the majority of which is on the quiet trails around Maltby, Roche Abbey, Laughton and Hooton Levitt. It is run in memory of former members of Maltby Running Club who are no longer with us. It’s five pounds to enter on the night, for which you not only get a number but also an ample buffet after the race in Maltby Catholic Club, where registration takes place. All profits from the event are donated to the British Heart Foundation in recognition for the help and support they have provided the club throughout its existence.

The race starts with a dash across the field to a kissing gate in the corner before a trail through the woods eventually leads to the peaceful tranquility of Roche Abbey, a 12th century home to Trappist monks which now lies almost entirely in ruins. Emerging from Kings Wood around the back of the abbey, runners embark on a 1.5 mile, 270ft climb through Slade Hooton towards Carr which also includes the race’s only significant road section. The route then heads back down towards Maltby, across the river and past the church before a sprint across another field and negotiation of a couple of more kissing gates leads to the finish line and a wander back for a pint and some grub.

141 runners took part in the race. It was won by Lewis Banton of Clowne in a time of 38:08. First lady was Catherine Eddison of Rotherham in a time of 43:35. Six Striders were in attendance and, quite unbelievably, I was first! 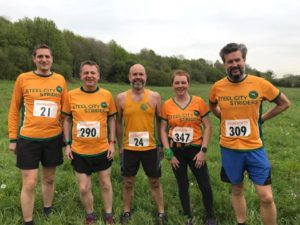