This year has been a return to half-marathon racing for me, after a two-year-plus hiatus.

It started off badly, with a disastrous performance at the Retford Half Marathon back in March, where I’d been ill the week before and was having problems with constantly being fatigued. A long held dream of mine had been to break the 90-minute barrier, but after running 1.51 at Retford this seemed ludicrous to say the least and, partly out of disappointment and frustration, I wrote it off as completely unachievable for 2019.

A few months of working out what was wrong and going back to basics ensued, but in the summer months I finally turned a corner and started to thread together consistent weeks of training. I tentatively entered the Newark Half Marathon as a “practice” in August. Manchester was always my ultimate goal, but being relatively inexperienced over the distance, I wanted the confidence boost of at least completing a half-marathon without any calamities.

To my relief, the race went well and I finished in 1.31. I was happy, but ultimately wanted to get more out of myself. After a bit of recovery, I began training harder than I ever had before.

This leads me to the main point of the race report, (congratulations to anyone who has stuck with me this far) the Manchester Half Marathon . It came with all the usual faffing of big races; travelling in advance, the conundrum of where to leave your bags and standing around ages before the start. However, this was largely made up for by the great support and atmosphere.

I’d been confident in the weeks before tapering, but my positive mindset faltered at the last hurdle as I reduced the intensity and distance of my runs. Attempting short bursts of goal race pace felt hard and doubts started to creep in.

Race day finally arrived and I stood in the stereotypical grey and drizzle of Manchester on a dual carriageway somewhere, feeling physically sick with nerves and questioning my sanity. It was a relief to get moving, but I felt flat and heavy-legged during the first few miles and questioned if it would be my day as I ticked through five kilometres in 21.46 – behind goal pace.

I was ahead of the 1.30 pacer in the start area, but knew I would be caught. I was glad when this happened between miles three and four; it felt easier mentally to be working in a group. I was a little alarmed by how much quicker the leg turnover of a 6.50 mile compared to a 7.00 mile felt, but my effort level felt controlled, so I kept going and soon forgot about the initial flat feeling.

We were clipping along nicely, but somewhere between five and six miles I sensed that the pace was too quick for the relatively early stage. I checked my watch and saw my intuition was correct, the pace had lifted to 6.40. I tried to stay calm, took my gel as planned, and let the pace group stretch ahead just a touch. I didn’t want to let the distance become insurmountable though – it would be a tough race if I lost them. Not panicking paid off and I gradually reeled them back in over the next half to three-quarters of a mile.

My confidence grew as we got deeper into the race and I remained feeling strong. I knew I was regaining the time I’d lost, but I didn’t know by how much. It crossed my mind that I could try to push on, but four miles is plenty of time for things to go wrong. I stayed tucked in behind the pacer in our now rapidly dwindling group.

10 miles came and went. In previous half-marathons I’ve been suffering by this point, but not this time. I sensed that I could stick with it, but didn’t allow myself to contemplate going under 90 minutes; there was still work to do.

Beyond 11 miles I naturally found myself trying to force the pace and this time I allowed myself to go with it. I glanced back a few times, expecting to see the pacer overtake me, but he was out of sight. At mile 12 I looked at my watch to see I’d put down my equal-fastest split. I tried to work out how fast I needed to run to break 90 minutes, but mental arithmetic was beyond me at that point, so I turned my pace screen off and put every ounce of energy into running.

However, as the inflatable finish arch came into view at the end of the long home straight, I couldn’t resist another look at my watch. 1 hour 27 minutes. I knew it was possible I could make it, but I also knew it would be close.

I stood still for a few seconds, feeling genuinely shocked, never having truly believed I would break the 90-minute barrier.

Well done to everyone that ran and to anyone who made it to the finish of this report (sorry if it was really boring).

Manchester is a bit pricey in my opinion and with an early start of 9am, quite a lot of planning is involved if you’re coming from further afield. However, it is a fast course with lots of support and the guarantee that you’ll always have other runners for company. The medal’s nice too!

Unusually, I didn’t actually see any other Striders before the start, but there was a handful of us there. Great running, everyone!

The full results are here and the Strider results: 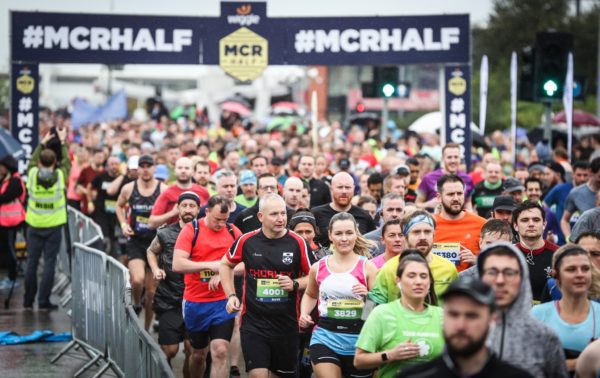