I was a cloudy morning, little bit chilly but perfect weather for a marathon, no rain and no wind! After a stressful week at work, coupled with a bad case of maranoia, I’d not had my feet up as much as I would have liked in preparation. Luckily for me my brother lives a 10 minute walk from the start line! The perfect marathon for me!

In terms of training, I had really put the work in for marathon number 4 and I certainly felt ready. My hubs, Adam, who has just joined the Striders has been running really well the last few months and decided to sign up and run with me.

We arrived at the start with 45 minutes to spare and it was really busy, as we made our way to the pen, I couldn’t see either of the pacers I wanted to follow and there was no room to move so we just stayed put. It turned out we didn’t see the pacers once for the whole race!

We both then had the obligatory tech melt down, my headphones packed up and his Strava decided to shut down! We got the Strava going but I now faced a very long run with no music and I was a bit gutted.

It actually took us 9 minutes to get over the start line but with all the tech melt down it didn’t seem that long.

We settled into our pace and I have to say not having any music was absolutely fine, I really enjoyed listening to the chat and the crowd and the various bands and choirs. It really was a fantastic marathon, so well supported. There was not a bit of the course that didn’t have people out on it. The official water and gel stations were there, but lots of extra ones thrown in from the local churches and community centres on route. They even had signs telling you which part of Manchester you were in, which I thought was really great! Loads of shouts for Striders too which is always such a massive boost. It is billed as fast and flat, there were a couple of cheeky inclines but nothing compared with Sheffield, about 350feet of elevation throughout according to Strava.

We pushed on and as we approached mile 25 Adam let out a yelp, as his hamstring cramped. He told me to keep going… so I did! He did manage to spring back into action and finished just 20 seconds behind me.

I would definitely recommend this spring marathon, if you don’t get in for London it’s a great alternative. So well supported, the crowds and marshals were fantastic, I will certainly be doing Manchester again. 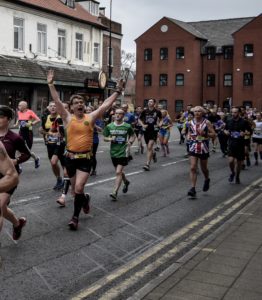 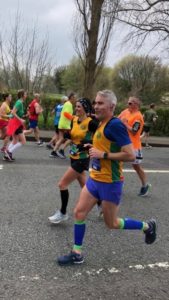