It was Judith who introduced me to Spain and Andalucía back in the early 90s and it provided the backdrop to many adventures. This culminated in our buying an old casa in the rustic village of Niguelas, nestled in the foothills of the Sierra Nevada, just South of Granada. It was a sunny haven we both loved. It seemed an obvious choice therefore to run the Granada Half Marathon as part of our fundraising in her memory #sixty4judy. The idea of racing through such a beautiful city and tackling what I knew would be a tough course was exciting. And, of course, I wanted to honour Judith’s memory and the happy times we spent there.

Granada was looking beautiful in the Spring and 4,000 runners set off on Saturday evening from the impressive sports arena in Zaidin to the South of the city and headed West into the sun. The heat was stifling as we embarked on a wide circuit from the South towards the West and then turning North. Already the crowds in the outskirts were impressive, but as we swung back towards the city they just kept getting bigger and more enthusiastic.

So far so good, but I knew I’d set off too quick driven by the crowds and excitement and, after 10k, which I’d done in around 50 minutes, we began to climb. And then climb some more. We were headed up the hills towards the Moorish Albaycin quarter and the climbs were relentless. The tops of the Sierra Nevada in the distance glistened with snow. The sun still shone brightly and even some of the locals were struggling. We finally reached the top and flooded into the narrow cobbled streets, twisting one way then another, through ancient gateways and arches, crowded on all sides by enthusiastic spectators. “Venga!” they cried.

Despite the effort this was incredible fun. We sped round blind corners and hurtled over cobbles before finally descending back along the River Darro into the city. Horns blared, bands played, people partied. Yet, we still faced a ferocious climb back up and past the Alhambra Palace before winding through the gardens and making a final turn back towards Zaidin. This was the chance to make up time, but as I picked up pace I could feel a cramp coming on. Nevertheless, I passed quite a few runners before we emerged through large crowds into the stadium and a last effort to style it out on the 100 metre track. I was home in 2:01:42 and exhausted.

Would I recommend it? Absolutely. Expect heat, hills and fumes from queued cars, bikes and scooters. Plus a slightly haphazard approach to organisation and drinks stations – this is Spain after all. In a field of almost entirely Andalucían runners I saw one other Brit (there must have been a few others) and fewer female runners than you’d expect in the UK. Yet, this is an amazing experience and a race like no other. You won’t PB, but you’ll depart with unforgettable memories and a new feeling for the Spanish way of life.

If anyone is interested in running in Granada I’d be happy to offer advice and help.

We’re raising money for brain tumour research and support and also to help improve bereavement support. If you would like to help please visit the ‘Donate’ page on our blog. Thanks for reading. 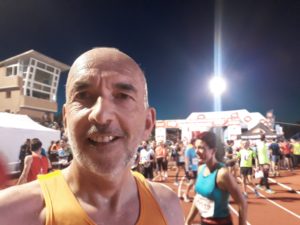 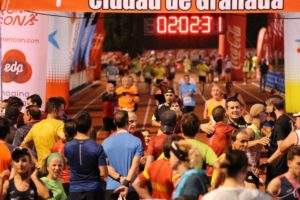