Ted Hughes wrote that the Moors ‘are a stage for the performance of heaven.’ A lofty start for a race report. But if the set of a fell run could be thus described, then one that ends with a free can of Vocation Brewery’s Life and Death might be better described as paradise, whatever your religious inclination.

Hughes’ poetry is uncannily apt in describing the theatre of the action, but it’s unsurprising given he was raised here from his birth in 1930.

The race starts ‘Under Heights Road/ Under crucified oaks/ Among slovenly bracken/ In the broken spine of a fallen land’ above the dark river that has once again folded away part of the town. ‘Circling in stilted majesty’, the race winds anti-clockwise over Crow Hill and Midegely Moor and back via Wadsworth Moor ‘Where the miles of agony are numbness/ And harebell and heather a euphoria’.

I was 34th in 1.00.48. Three minutes slower than the last time I ran it in 2016, but I had more fun, took my time on the muddy descents and spotted more clouds and cracks in the sky.

Near the eve of an election, the words of Hughes are auspicious, the light left by Storm Atiyah is like that of Hughes’ in ‘The Trance of Light’, it ‘Holds this land up again like an offering/ Heavy with the dream of a people.’ Let’s hope for tactical votes and dream of some decent flood prevention for this great little place. 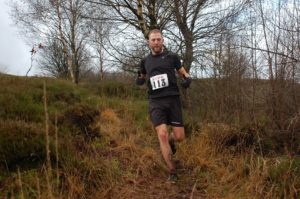