Grassmoor Country Park is at the head of the Five Pits Trail , a series of bridlepaths created mainly from disused colliery railway lines which extends as far south as Tibshelf where it links up with the Silverhill Trail. Through countryside which we normally speed past on the M1, you can run as far as Mansfield if you wish.

This is a new event from the North Derbyshire Running Club stable who also organise the Bolsover 10k, Spire 10 as well as the monthly 5k No Walk In The Park, all of which are quality races and this race meets their high standards. The route, which is not flat, is on hard packed gravel trails and will take your road shoes with ease, even when wet for, as the lantern rouge was coming in, it started to rain which was a shame as most were wishing that the rain had come half an hour earlier as the weather was rather hot and muggy despite the breeze. With fun run for the younger ones who were all sporting their medals with pride, the grown ups got a rucksack, useful for xc spikes etc, and a pleasant change from the usual t-shirt, mug or similar kitsch. 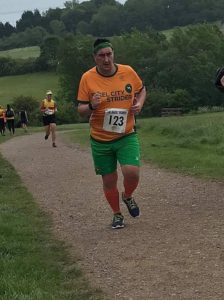 It was somewhat warm today.

The race had 231 finishers, including eight Striders, and is bound to attract more as word gets out what a good event this is although it would be interesting to see how the course would cope with an entry limit of 600. Winners were Chew Tan, Unattached, 46.56 followed by our very own Sarah Allcard in second place, together with the first man home, Greg Hopkinson, Beeston, 36:00. 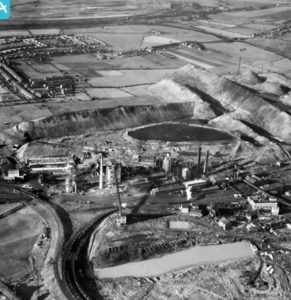 Grassmoor Colliery, 1952 looking west, courtesy of Historic England. The start/finish was somewhere centre left of picture with the the pond at the bottom one of the few landmarks that is still identifiable today although it doesn’t look quite so flourescent now.