Not on the typical Manhattan tourist scene, Randall Island’s highly scenic Icahn Stadium plays host to New York Road Runners Tuesday night speed series. A monthly event from June through to September offering prospective athletes the chance of competing in four different track races (200m, 5k, 400m and 4x 100m) for $15. At only four times the amount paid to run at the Dorothy Hyman Stadium recently, this represented great value for money in a city where a standard glass of red wine will set you back $15 plus tip.

The 5k races were second up on the evening, with heat allocation following the old fashioned ‘under or over’ method. After a mere 20 runners stepped forward at the under 17 minutes call I trepadatiosly obliged at a call of under 17:30, to make up the dregs of the first heat.

At this point it would be fair to point out that optimism wasn’t at a peak level. The other causal factor being an unorthodox race preparation. This consisted of a morning walking around Time Square and shopping (in exchange for permission to race) and a 6 mile walk to the venue, via a picturesque but scorching Central Park. Indeed, by the time the stadium was reached a whole host of ‘normal’ holiday activities were more alluring. 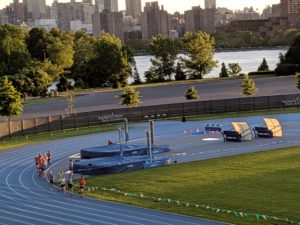 Our man in red acting as pacemaker for the second bunch.

As nice as it was to have the excuses listed above, there had been enough recovery by the time the race started to go off too fast. This lead to a first half of the race leading a second echelon of athletes, who were more than happy to avoid the home straight breeze. Unfortunately, from halfway onwards a steady stream of runners passed by as their temporary leader’s pace dropped. With 1200m left it was all that could be done was hang on to the entrails of the last of the group to pass. Struggling at this point the clock was avoided until the bell when, already having been lapped by the frontrunners, it read a tad under 16 minutes, meaning there was a chance to salvage an unexpected time. Although all spring had sprung from the stride at this point, a souvenir PB was clung on to and the day celebrated by bounding back with a traditional yellow cab and a Manhattan.

Results are on this link NYRR Tuesday Night Speed Sessions #1 With A and B races combined there were not 40 athletes on the track at the same time!. As you may observe, there was electric timing with results down to the 100th of a second. The A race had 24 competitors and was won in 15:28:86. Some of the other events had quality at the sharp end too. 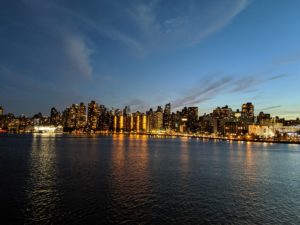