Set in the deepest, darkest suburb of Newmillerdam, Wakefield (basically neither Wakefield or Barnsley from my uninformed perspective). Newmillerdam’s finest (and only) scenic trail race trapped me into the beaks of the abyss. The 5k race (a smidgen short on my Garmin watch!) is organised by the Newmillerdam Community & Conservation Association, in association with the village’s annual duck gala – which I was disappointed to have missed, as it took place the weekend before…

After a mooch around some of the tracks adjacent to the main road and leading into the dam (pictured below), I headed to the entrance of the Newmillerdam Country Park and was directed from the car park to the race headquarters, located at the tranquil arboretum to collect my race number. 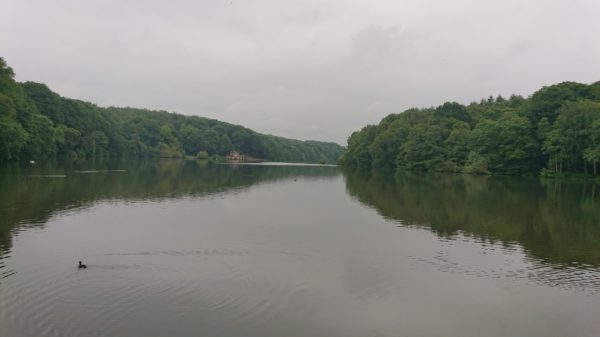 View of the pristine Newmillerdam

I arrived just in time for the finish of the 2K junior race which started nearly an hour before the quacky race – a bit of a shame really for the 20 youngsters, as not many runners were knocking about to spectate and cheer them on! Each received a medal (no medals for the adult finishers barring the winners of the individual categories), an ice cream and a photo with the two Wakefield Trinity Super League rugby players, who popped down to support the event. This was certainly a rare occurrence and a pleasure to chat briefly to such top notch sporting talent, especially as an imposter Eagles fan.

Closer to the start of the race there were some eager newcomers queueing at the registration desk which caused a short delay. Once all the participants had been registered we were then ushered to the start line, a slight change of route from the kids’ course. A glance over to some of the other runners, I spotted a familiar face from Penistone’s Footpath Runners. I remembered meeting this runner at the recent Wharncliffe Sider with Rosie trail race, and I struck up a conversation where he mentioned that his fellow club members had abandoned him to attend another trail race (he seemed to be in a jovial mood though). After an announcement from the organisers, the introduction of a group led warm-up was met with a mixed reception by some who just wanted to get on their way.

On mostly trail paths, the one-lap race began from the open area around the arboretum then dropping back down (quite steeply!) into the lower woodland for the 2k mark. At 1k, there was a somewhat weirdly positioned drinks station just before the climb (perhaps, due to the junior race) – this terrain was testing after the previous night’s festivities at the Handsworth Hobble.

The sinuous middle sections combined with dodging the puddled patches were the toughest parts of the route. At this stage, the showery weather had started to dissipate and the course then sharply turned back past the lake (but you pretty much avoided the delightful setting of the dam and large portions of the local nature reserve…), through to the top section of the woods along the gnome roam walk (featuring the likes of the rather novel gnome sculptures – Tony, Alan and friends) round the last corner to the finish.

On the whole, an enjoyable evening! The charming surroundings and energetic marshals who lined the route certainly made this a quacker of a race. I even bagged myself a photo with the two rugby league stars after the prize giving ceremony (photo below).

The race was won by Michael Grain (Barnsley Harriers) in 18:27. First lady was Jenny Wakeman (Barnsley AC) in 23:16. 201 runners completed the course. From what I’m aware I was the sole Strider in attendance.

Full results can be found at: https://racebest.com/results/4sqqt. 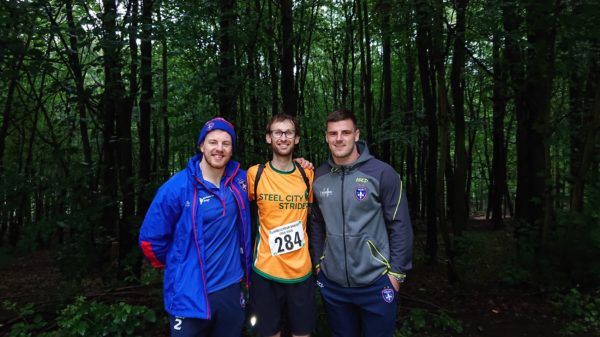