“Very flat, Scunthorpe,” Noel Coward would have written had he ever taken part in the North Lincs half marathon. For the race is, as billed, “fast, flat and friendly” and with very favourable conditions (cool, very little wind) it really was a day for PB hunting.

To avoid an early start and to fool my wife into supporting me we had stayed in Scunthorpe’s finest hotel and restaurant “San Pietro” on the Saturday night – we had enjoyed a really rather splendid Italian meal and I had managed to resist drinking too much wine.

I awoke in the wee hours and realised that I had forgot to charge my watch before setting off for Scunthorpe and had no cable with me – it appeared I had about 12% charge – would this be enough?

Sunday morning and I jogged down to Quibell stadium from the hotel – this should have been 1.8 miles but I made the mistake of asking directions from a local runner that I chanced upon about half way rather than trusting my memorised route and he sent me on a less direct route so I ended up running some 2.5 miles as a warm up. Arriving at the start I spotted Roger and then Adam and a few other striders including a hungover Alex. Adam confirmed to me that the course really was completely flat so it was essentially a question of trying to make like a metronome. The only gradients present were those required to cross two motorway bridges, one on the way out and one on the way back.

I was attempting to go sub 90 minutes having ran the far more interesting Sheffield half in 92:46 three weeks earlier. I have little experience of flat runs being more at home in the fells so had little idea of whether this would be doable but I set off at 06:48 per mile pace and hoped I could maintain it. This gave ma a little leeway should the course come up long or if I faded at the end.

It transpired that the ninety minute pacers provided had gone for the very same pace so I tucked in behind them with about twenty other runners and the miles gradually ticked by. If my watch had died I figured I could just stick with the pacers (although in fact, my watch battery made it to the end). Adam and Alex were visible just ahead of the 90 minute train and for several miles we maintained this formation. At some point our little pack caught up with Adam and carried on (see photo).

I maintained bang on 06:48 pace for about 10.5 miles and then started to struggle a little. The 90 minute group very gradually left me behind but remained visible. At some point it must have passed Alex and Lee too. By the last stretch before the stadium I was also catching up with Alex but my average pace was now 06:51 so I still had a chance of going sub 90 minutes. The race finishes on the track in Quibell stadium and Alex and I gained this together and tried to push each other on for a sprint finish. Unfortunately, 90 mins ticked by with most of the track section still to run (my watch had the course at 13.22 miles) so sub 90 will have to wait for another day. Alex finished just ahead of me (but my chip time was a second faster so there – not a bad effort with a hangover though Alex!) We had seen Lee finishing just ten seconds in front of us.

I was carrying my dog’s GPS tracker to allow my wife to track me without me having to carry a mobile so I was Harper for the day (Harper could do sub 90 easy if she could be bothered but she’d rather chase rabbits any day)! This proved to work very nicely so she was on hand to cheer me around the final few hundred metres on the track where I duly received my complimentary muffin.

A two minute PB for me, and PBs for Adam and Roger too (I don’t know about the other striders) so the perhaps uninspiring course did at least serve its purpose.

The first three finishers all went sub 70 minutes for the first time in the event’s history with fastest of the lot being William Strangeway of Lincoln Wellington Athletic Club in 01:07:57 and his clubmate Laura Kaye was the fastest lady in 1:23:09. 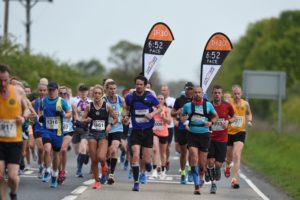 The 90 minute train about to engulf Adam. Photo: Howard Roe