The spring edition of the Northern Road Relays was back in Birkenhead Park for the second year running. Last year, we were pleased just to be taking part after several decades’ absence. This year, we were out in force, and on a bit of a mission. 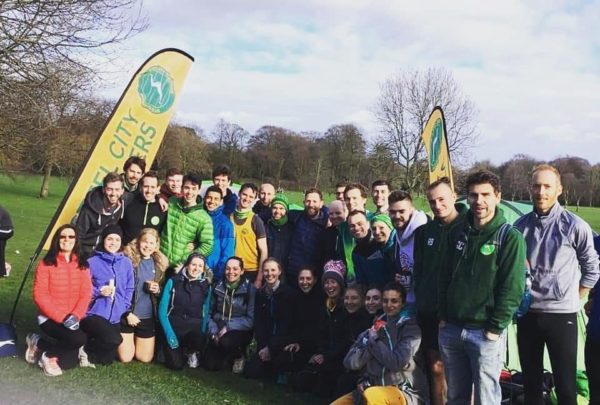 Women compete here in teams of 6, men in teams of 12. Both run a mixture of long legs (<8k) and short (<4k). The 6 and 12 legs add up to 20 and 40 miles for the respective races, so these are long events that play out before you over several hours. With short laps, it’s very spectator-friendly: you’ll see your team go past every 15 minutes. It’s a great chance to spend an afternoon having a quick run yourself but mostly watching club-mates turning themselves inside out. So although it can seem quite serious with the high standard of competition, really it’s perfect for a social running club like ours.

That said, it does take some courage to put yourself out there. Running leg 1 at these races is especially tough. If you’re a good club runner, but merely human rather than super-human, you’re used to having 80%-90% of the field behind you. At this race, that part of the field just isn’t there, so you can be running really well and still find yourself towards the back, worrying that you’re letting your team down when you aren’t. But facing and overcoming the nerves is all part of the fun, the support for all runners is overwhelming, and the satisfaction at the end is something special. 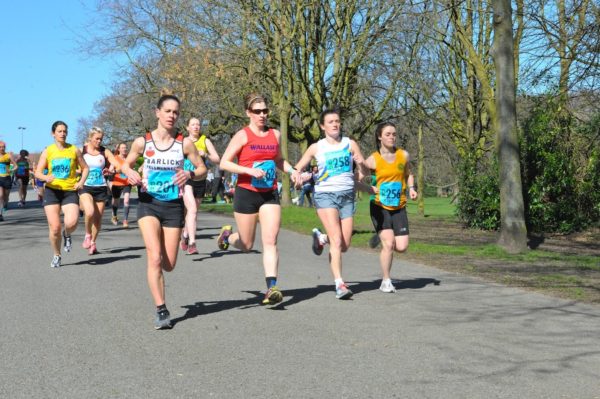 This year, Poppy Tovey started first for the women’s A team. She produced the run of her life. If she’d been running any standard distance, she’d have obliterated her PB. She handed over to Frances Roberts in 31st place of 64, a fantastic start. 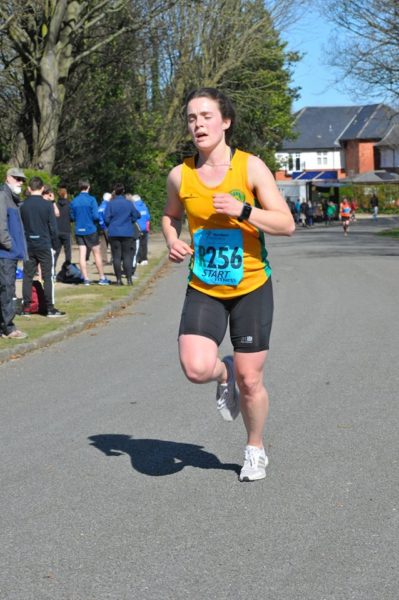 Fran is in marathon training, so had run 22 miles the day before. So fatigued were her legs that she only managed to gain 6 places and knock 4 seconds off our fastest short leg time from last year. (Note: check Strava to see if Fran really did the long run she said she did.) 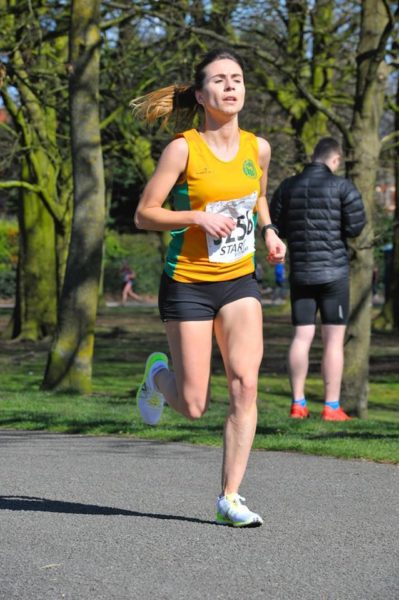 Gillian Allen kept the momentum going, taking more places on leg 3, and Caroline Brock (another Strider showing great form ahead of a marathon), moved us into the top 20. Once Jennie Stevens and Kim Bateman had passed a few more runners between them, we were up to a final place of 15th, one away from matching last year’s performance. 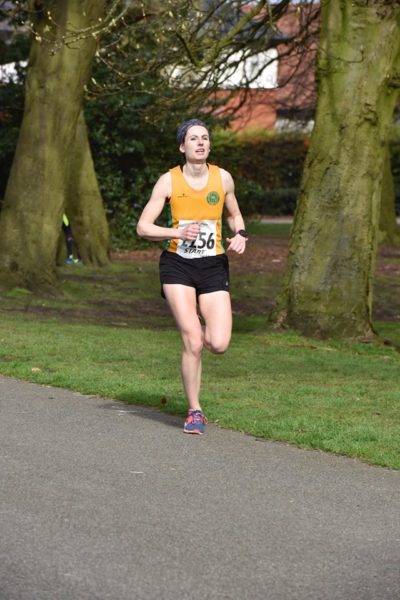 This is becoming the Striders MO: get established on leg 1 and then relentlessly work our way through the field. Everyone had played their part, running well and gaining places from start to finish.

This year, we had a B team too, and the story was the same there. Val Gasparini set us up with a good first leg, and we built from there, moving through from 52nd to 39th. That was despite half the team running with minor injuries. The stand-out performance was from Laura Fletcher, who stepped in to complete the B team so that others could run, and produced a brilliant leg to show she absolutely belonged there. 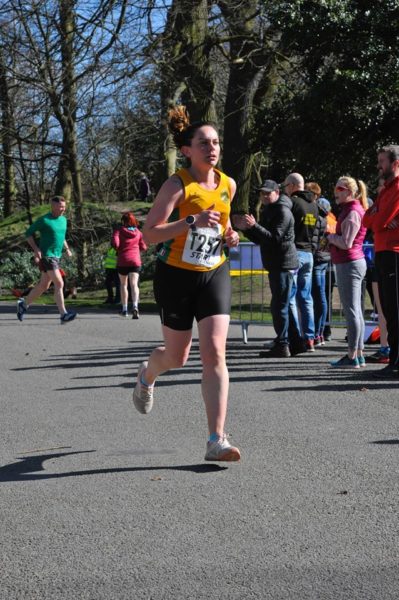 Rotherham Harriers were first in 1:47:40. Full results are here.

In many ways, for us these were the Tom Halloway Memorial Spring Road Relays. Sending Striders teams to this event was Tom’s idea in the first place, and he pushed it and made it happen. Without him none of us would have been there last year or this. It was also his last race for the club before moving on to Rotherham Harriers.

So it was fitting that Tom was on leg 1, leading out the men’s A team. And what better way to start than at 15-minute 5k pace? Some doubted whether even the pink arm-warmers could help him maintain that for 7.7k, and they were right to, as he finished at 20-minute 5k pace having massively over-cooked it. He’d put so much time in the bank early on that this still averaged out to a strong time, faster than he’d managed last year. But he’d done it in the hardest way imaginable. 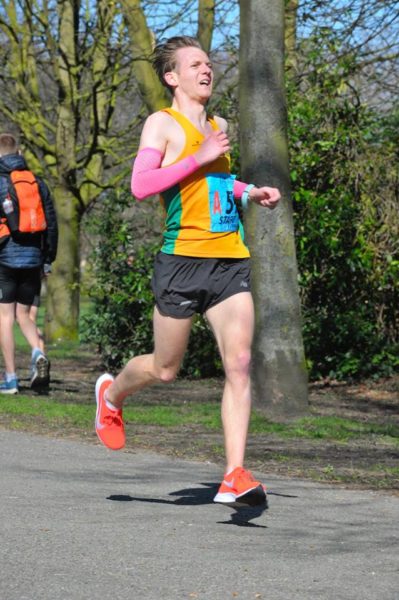 Tom had set us up in 44th place. The goal—and we were desperate to do this—was to finish in the top 25, to qualify for the Nationals and send a team there for the first time since 1992. So there was work to do, but we knew from experience we’d have more depth than a lot of teams, so there was no panic.

Leg 2 saw Steve Canning run one of the legs of the day, destroying our fastest short leg time from last year by 24 seconds, and gaining 8 places. Yes, he was wearing Vaporflys, but he’s in amazing form and it can’t all have been down to them. 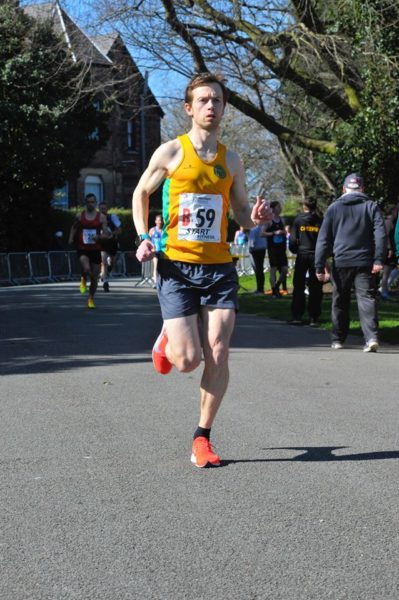 Stuart Carrack and new boy Stephen Schubeler followed Steve, and ran solid legs and moved us up another place, putting us in 35th. Still not quite where we wanted to finish, but we weren’t out of it yet either.

Joe Sweetnam-Powell, another new signing but familiar to many—if you’ve ever run Hillsborough Parkrun then he probably won it—had our next long leg. His was our fastest long leg, with a far more dignified and controlled fade than Tom’s. The field was starting to spread out now, but this was still enough to gain us another couple of places. Then Liam Turner took three more with a blistering short leg. Between them, they’d put us back in the game. 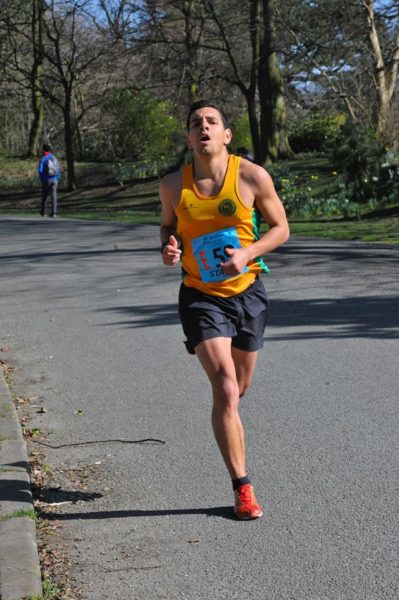 Ben Jones had our final long leg next, and laid some demons from last year to rest by running a massive minute-and-a-half quicker than he did then. It’s a mark of the quality of the field that Ben, who won Fastest Jones at the Anglesey HM a month ago (yes, that was a real prize), was only the 5th fastest Jones in the road relays. (I was the slowest of 3 Holts, but that’s normal so tells us nothing.) 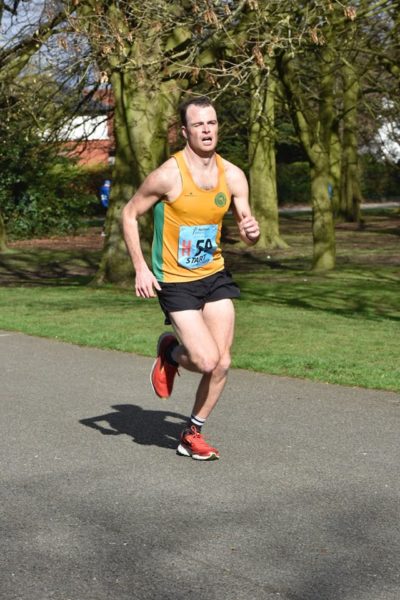 Andy Norton put in another beast of a leg next, moving us up to 27th place. Striders supporting track-side had started counting runners through at this point to work out where we were, and the tension was rising. Sam Brown and James Fulcher managed to claw back another place to put us 26th, and halve the minute plus gap to the team ahead, but with two legs to go we knew we were just the wrong side of the qualification line. It was looking touch-and-go whether we’d make it.

At this point, let me introduce you to Kristoff Boynton, Steel City Striders’ best-kept secret. On paper, he’s arguably the fastest runner in the club. He doesn’t really do endurance; he’s built for speed: a 3.85k blast is perfect for him. But he’s had problems with injuries so can’t train much, so mostly sticks to football. He hadn’t raced for nine months, but as part of Project Nationals, at a secret facility out in Rother Valley, we’ve been overhauling and recommissioning him. He hadn’t been tested in a live environment yet, so we didn’t know quite what we were going to get, but he was on leg 11, and his moment had come.

Kristoff absolutely crushed it. He took us past Warrington, who we’d been tracking closely for 90 minutes since their Nick Jones (the day’s Fastest Jones) had passed us on leg 5, and overtook Sunderland Harriers too. Watching him run up the drag to the finish, space and time seemed to bend around him. He produced our fastest short leg of the day, from nowhere, leaving us in a qualification spot with a cushion behind us. It was heroic stuff. 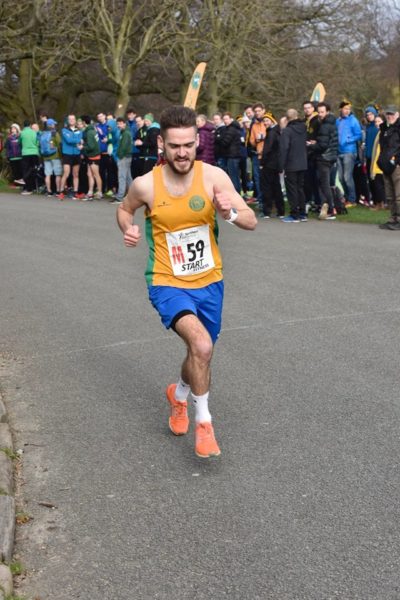 It fell to Rob Bishop to finish the job off. Warrington tried to come back at us, but Rob was too strong and they fell short by 7 seconds. In any case an unfortunate injury to the final Darlington runner had given us another place, and with a disqualification of a team ahead of us to come, we’d managed 22nd of 65 overall. Job done. The Nationals dream had become reality. 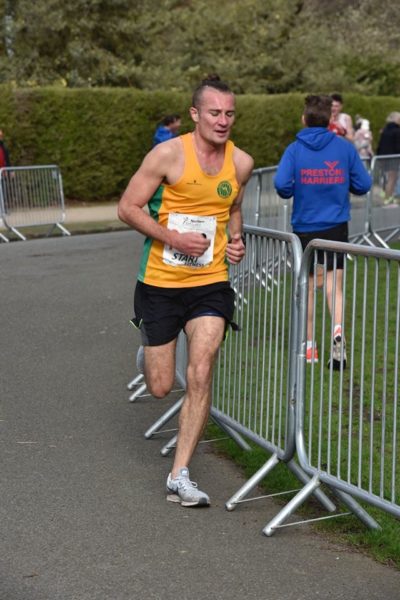 All that was left was to cheer in the men’s B team. Tom King deserves a special mention here: he had perhaps the toughest gig of the day on leg 1 for the men’s B team, but turned in a time fit for an A team long leg. Matt Rimmer rediscovered his form from last year too, running the team’s fastest short leg. Overall, over 3 hours and 45 minutes, the B team was within a couple of minutes of last year’s A team’s time. A more than creditable performance.

Leeds City were first in 3:06:43, over five minutes ahead of City of Sheffield who took 2nd. Full results are here.

Remarkably, not a single Strider had lost a single place on their leg all day. Last year I said that for months to come, all across the north, runners would be waking in a cold sweat from dreams of Striders closing them down. This year, those nightmares were made real once more.