The Endurance Life: Northumberland event is a trail run along the Northumberland coast, part of their series of 12 coastal trails. There were 10k, half, marathon and ultra distances available, all finishing at Bamburgh Castle. This report relates to the marathon (27.2 mile!) distance.

I love Northumberland and trail marathons, so this one was a must-do! I found a lovely hotel nearby and was all set for a lovely child-free weekend with my husband. Registration etc was at Bamburgh Castle, we picked up Tshirts and freebie protein-bars, joined the toilet queue, and then had a comprehensive briefing before being bussed to the start location near Alnwick Castle.

It was a little odd going from a big event site to a field, but we weren’t hanging around long, the four buses all came roughly together and we started quickly. The route follows the river down to Alnmouth before turning north up the coastal path. I had decided to try “jeffing” this race, running for 60 seconds, then walking for 30 throughout, so kept catching people then dropping them again. There were more canicross runners than I’ve seen before in an event, and they started at the same time, which was a little un-nerving as I found myself almost falling over a dog from time to time. That didn’t last long as they sped away from me!

This first section took us on paths across fields, through woodland and fortunately UNDER both the A1 and the main east coast railway line – we had a fabulous view of the viaduct. There was one busy road which was very well marshalled as well as being clearly signposted for the drivers (not that that stopped one driver almost taking my arm off ☹). As we neared Alnmouth we came back on to roads in the towns, but skirted the town centre on paths beside the river and on to the beach, finding CP1 at the 10k point.

From now on we could take advantage of a lovely southerly tailwind, as the route followed the coast, sometimes running on the beach, sometimes just above it. We passed through various coastal towns – all very scenic, but by then they were all merging into one in my addled brain! I was pleasantly surprised how easy it was to run on wet sand, I’d been worried about that.

There were checkpoints every 10k with water, bananas, and jelly babies – it was plastic-free so I carried a cup and had my hydration bladder filled up at one of the checkpoints by the friendly marshals. There were no race toilets but apparently some public ones in the towns, not that I ever found any.

Bamburgh Castle is a very distinctive landmark, but from the beach it was difficult to see until you were right underneath it, and I was not amused when the final marshal told me it was another 2.5miles away when I was sure I was REALLY close. It turned out that it was a 27.2-mile route (28 miles on Strava for me), so I’d been a bit optimistic.

By now I was running on dry sand as the tide was coming back in – trying to dodge small waves to run on wet sand on legs with 40 km in them was not really a thing. I met a few ultra runners at this point too – they had to do an extra loop at the end of the marathon course.

Finally, the sign with an arrow to the “FINISH” appeared, but sent us 40 m up (more than 10% of the total course elevation) through the sand dunes to the entrance of Bamburgh Castle. I was inspired by the cheers for the canicross lady just ahead of me – “Go Mummy!” echoed down the hill – then I heard my husband yelling “Go Fi!” for me as well. Without a fresh Alsatian (she’d recently changed dogs) to pull me up the hill, I was a bit slower, and finding the actual finish at the top required some guidance, but it was great to get there.

Unfortunately marshals had been giving out medals to dogs and their owners, so they had run out by the time I got there, which was pretty gutting. I was really looking forward to hanging up my second marathon medal, and having been out for ages, it felt hard. I’ve since heard that they’ve ordered a new batch and will post me one, which is good, but having enough medals on the day would have been better! Neither did I make any of the event photos, I guess they’d all gone home by the time I plodded in ☹ Good to see that other Strider, Sarah, had some great photos 😊

Overall a great day – beautiful scenery, well signposted and marshalled, less ideal on running out of medals but that’s probably an over-enthusiastic marshal. I’d definitely do this again, maybe the ultra next year, although it’s early in the season. I’m sorry that the other events in the series are much further south for me, I’d love to try some of those too. Details are here. 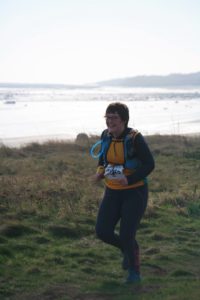