It was Wednesday morning, and I was grudgingly embroiled in a spot of yard duty, trying to stop a handful of miscreants garrotting each other with a skipping rope. That evening’s Oughtibridge Chase certainly wasn’t at the forefront of my mind, but my colleague – and Chase junkie – Joe ‘I’ve won it for the past ninety-three years on the trot’ Sweetnam-Powell was about to change all that. Thinking that the numbers on the yard could do with a bit of thinning-out anyway, I turned a blind eye to chaos when I saw him approach, and we were soon making arrangements for getting to that evening’s race, which I like to think of as residing in the upper echelons of the Chase pantheon, alongside Hallam and Chevy. Thankfully, JS-P had room for The Boy too, as the usual Gordian knot of the kids’ extra-curricular arrangements had been threatening to throw a massive spanner in the works.

And so it was that we arrived at Oughtibridge’s Coronation Park on a pleasantly warm evening in ample time to register, chat to some fellow Striders, faff about a bit and have a team photo. Last year, I’d arrived so early that I’d been given race number 1, which carried a (probably figmental) degree of expectation that I was anxious to avoid again, and taking JS-P’s slightly less punctilious approach to time management yielded the slightly more comical race number of 118. Disappointed that I hadn’t brought along a false moustache or retro sweat band, I then proceeded to cause a fiscal near-meltdown on the registration desk by paying my own £4 entry and The Boy’s £2 Junior Chase fee with a – quite reasonable, to my mind – £5 note and £1 coin combo. This created an interdepartmental crisis worthy of a corrupt developing-world government. How would they put the correct amount in the right plastic tub, wondered the disgruntled administrators, in a display of seasoned pen-pushing and firmly-inside-the-box thinking. I drifted off apologetically, mumbling something about safety pins.

Away from the pressurised financial hotbed of the registration desk, the atmosphere was jolly; young children took part in traditional sports day events – the sack race, the three-legged race, the vomit-after-eating-blue-ice-cream competition – all rewarded with a stream of gaudy rosettes. I laughed internally as several middle class mums made a show of not caring about the outcome of the adult’s egg-and-spoon race, their bitter congratulations and thin, forced smiles betraying the rabid internal monologues that would burst forth once the kids were in bed and they were on their third glass of prosecco. Then, over a public address system even more intermittent than my interest in gardening, came the instruction to assemble at the start line. As a Chase veteran, I had the advantage of a rough idea where this was, a valuable insight when the official directions were ‘over there’, accompanied by an arm waved in the direction of pretty much the whole park. Following a crash course in how to use an air horn, the Gala Queen got us underway, seniors at the front, juniors – who were completing a half-length 3k course – following behind.

After an initial lap of the park – during which we were funnelled around the back of the tennis courts like a gang of fifteen year-olds whose lunchtime fagging needed to be hidden from Ofsted, and I was nearly taken out by a litter bin that seemed to be loitering with intent – we started the ascent of Cote de Oughtibridge, a road climb graded 7 out of 10 (for difficulty of climb, presumably, rather than, say, artistic merit) by Cycling Weekly. This took us up to the turning for the Trans Pennine Trail into Wharncliffe Woods. ‘Ah,’ said my legs to each other as the 15 percent incline made itself felt. ‘This one again, is it? Well, don’t come crying to us when you can’t get up the stairs to your classroom tomorrow.’ At this point we were only a few minutes into the race, but the front runners were already pulling away and the field was spreading out. Not being quite the whippersnapper that I was, and therefore not a medal prospect, I soon found myself in a 2-way tussle for 4th, as the climb, now on well-made gravel trails through a rather Twin Peaks-y landscape of susurrating pines, continued to unfold. At such points as a navigational error would’ve been possible, pairs of marshals were on hand to applaud and point the way, but other than that, my competitor and I could’ve been out for a quiet evening run. As we passed the highest point and began the descent, I felt him begin to pull away. Oh no you don’t, I thought to myself, re-doubling my efforts to lengthen my stride. We were neck and neck as we passed through an open section, Himalayan Balsam rising from the brambly scrub on either side of the trail, a midge-ridden humidity developing away from the cool shade. I was suddenly aware of a dryness of mouth that I’d forgotten was possible.

As we re-entered the trees and began a particularly steep part of the descent, I was gifted my chance. My competitor became suddenly very wary, the technical nature of the uneven surface proving an unwelcome challenge that he just wasn’t up for (he later revealed that he had recently recovered from an ankle injury and was afraid of turning it. Fair enough; it was the same section on which Strider Adam McAuley took a nasty tumble in last year’s race). Being the single-minded ass that I am, though, I took full advantage and, in the most ruthless way you can when carrying out an action metaphorically, rubbed his nose in it. From then on, there was no looking back; fourth place (for the second year running….) was mine, and not even the stomach-churning smell of deep-fried food wafting out of The Pheasant could put me off my stride (although the dozen or-so kids demanding a high-five very nearly did). Overcoming the sense of mild peril that comes from freewheeling down a main road into the flow of oncoming traffic, I turned into the park for a final lap.

After crossing the line and receiving the sympathy-tinged adulation of my children, I was keen to find out how the medal positions had panned out. It had been one of the closest finishes in the race’s history, by all accounts; sadly, JS-P didn’t retain his title, narrowly missing out to Gareth Cooke of Penistone FR & AC. Unattached runner David Robinette finished third. The first lady home was Nicola Squires of Ribble Valley Harriers. A healthy selection of Striders completed the race, and the final results list is as riddled with green and gold as a box of Christmas tree decorations. 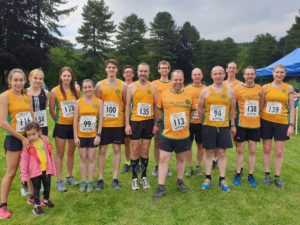