Ah… probably spent too much time chatting by the portaloos. Gaby Logan was counting down the start while we were just arriving at the back of the pens… cue a mad and somewhat unseemly dash through the crowd towards a slightly more appropriate pen.

The Oxford Town and Gown is a flat 10k on closed roads and University Parkland which is part of the series of runs raising money for muscular dystrophy. The race attracts around 5000 each year-  all of whom were much better organised than us.

This is the third time the Greenoughs have run the race and each year Oxford has been bathed in sunlight. While the northern contingent of our club was puffing up the hill on the Hollymoorside we were on the flat because we are soft and southern. A quick look at the results and it would seem we were the only green and gold.

The race was won by Joseph Smith (unattached?) in 31:41 and the first female was Diane Foster of Headington Road Runners in a time of 37:02. Once I’d weaved through the crowd I finished in a time of 43.04. By no means a PB but it was a happy run – much more important. Caroline thinks she got a PB but she doesn’t keep tabs on stuff like that (refreshing really) We can recommend it! But it is in the south… 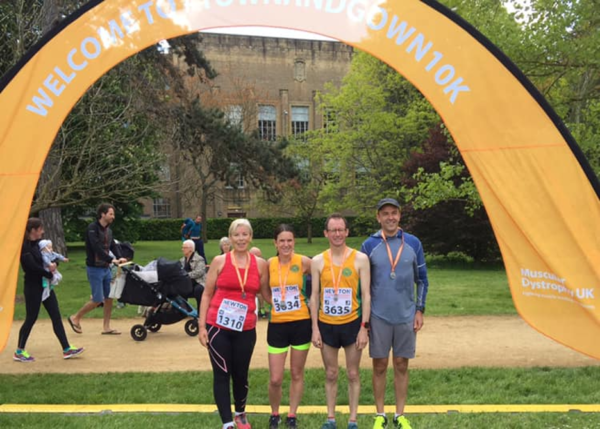