Fell running is a quality hangover cure, so with great serendipity the night before this one I’d been to Funk Fest, a celebration of sour beers at Abbeydale Brewery. I woke up after not enough sleep and thought: “It’s a good job there’s a fell race.”

After a massive bowl of cereal and a very strong coffee and a resolution to ignore the increasing tightness in my right calf, I put on some dark glasses and set off across Snake Pass. Anyone who ever drives across the A57 will instantly recognise Padfield as the middle bit of “Hadfield Padfield Longdendale Trail” from the signs near Glossop. It’s a small village nestled between the A628 and Glossop itself, next to the reservoirs that mark the western end of Woodhead Pass. The Padfield Plum Fair Scamper race is named after a village fair that is sadly in abeyance at the moment, seemingly apart from the Padfield Coal Race, which takes place immediately after it.

After parking up and saying hello to an inquisitive but standoffish cat, I headed to the kids’ playground for registration, then followed Google Maps’ directions to a public toilet half a mile away for some quiet contemplation. Restored and relieved, I made it back to the start just in time for the race briefing and the start, which was done by the race director beeping his car horn and then speeding off to get to the road crossing before the runners. I set off near the back, which is a mistake I keep making at the moment, but I was feeling a little fragile so I reckoned it made sense this time.

We wound our way out of the village and up a track past a smell of cooking bacon, before a couple of bottlenecks and out on to a field. I seemed to be the only Strider present, so I decided to focus on overtaking as many of the plentiful Penistone Footpath Runners as I could, to give myself a goal. The field was a fairly gentle climb, and by the time we got to the road at the top I was feeling good. We crossed the road on to a farm track through moorland, the sun was out, there were cows and sheep knocking about but they kept their distance, and then we climbed over a gate and set off up the main climb of the day. Although it’s classed BS, this section was pretty taxing, being on stony farm track. I just about managed to run it all, but it was touch and go. It didn’t last forever though, and then we were on to a slightly flatter climb up to a ruined hut (“Glossop Low Cabin” on the map) where a marshal ticked off our numbers and down the hill we went.

By this stage, unfortunately, there was no way this race was ending without a calf strain.

The route down began across some nice springy heather moorland down actual Cock Hill, and although I was being very ginger on my right leg I managed to keep in touch with the runner in front for a while. We hopped over another gate and suddenly there were Really Big Cows everywhere. They seemed surly but not agitated, so I spoke calmingly to them to make myself feel better.

We got across the field and over the bottom gate safely, and met another runner coming the other way. Oh. Turned out that at some point someone had got so preoccupied by cattle that they’d missed the flag half way up the field that meant “Turn right here” and everyone else had just followed them down the hill.

Back up the hill we went, and out another gate that led to a picturesque gorge with a nice stream to cross. I was really starting to feel the brokenness of my calf now, but I trundled on, not getting overtaken by many people, though the diversion had knocked me back a fair few places.

Climbing out of the gorge we found ourselves back at the bottom of the big climb, and just had a last mile of retracing our steps to the start. Once back on the grassy field I found a way to run painlesslyish and was soon back at the playground, stretching gingerly and listening to my idiot voice ask where registration for the coal race was.

It was just round the corner. And only three quid. And, as the people on registration explained, you get a £2.70 bottle of beer thrown in. Oh hell. Here we go…

The Padfield Coal Race is different from the Gawthorpe one that happens on Easter Monday. There, it’s a 50kg (20kg for women) bag and a 1km race on a flattish course. Padfield is a hill sprint with 25kg (10kg for women, though one of today’s female runners took the big bag). Runners go in groups of three to avoid congestion.

Thirteen of us signed up, including another two fell racers. There was a little discussion about technique (apparently the fast runners carry it across their shoulders), then the first three runners lined up and shot off up the hill at a terrifying rate.

I went in heat 3, after a man carrying a tyre on his back had belted up the hill in heat 2. I got the bag on one shoulder (figured it’d be easier to breathe) and waited for the starter. We were off! Or at least the other two runners in my heat were. I watched them zipping away as I tried with all my might to at least avoid the humiliation of having to walk.

After an interminable (47 seconds) ordeal, I crossed the finish line, put down my bag of neutron star ballast, picked it up again and put it in a Range Rover so it could get ferried back to the start and settled down to watch the last two heats. Two of the runners in the last one were sick afterward.

I was 8th in the coal race. Not sure who won it, but they were a damn sight faster than me!

Despite the considerable pain in my leg, I really enjoyed these two events and I rediscovered some of the joy that’s been missing from my racing the past few weeks. I definitely need to do some running-while-carrying-stuff training though. 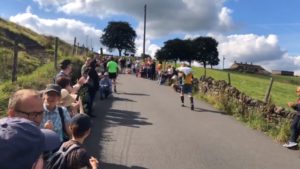