Peak Raid 3 is a series of 4 navigation events in the Peak District.

On each event there is a total of 500 points to be gained from navigating to 15 control points over a 3 hour period. It’s up to you whether you walk or run (or both!), and you choose your own route. You can also run solo or as a pair.

The second event of the series was on Sunday 1st December in Great Longstone near Monsal Head. I did the first event in the series, also my first navigation event, as a mixed pair but this time I went solo, so as we pulled into the village the nerves set in!

I was lucky with the weather – it was a bitterly cold, frosty morning but sunny and dry too, resulting in wonderful views around the area. I collected my dibber, got my kit checked and I was off by 9:30.

After dibbing in I took a few moments to look at the map and opted to head south towards the Monsal Trail. I found the first CP without difficulty and then made my first bad decision. Instead continuing south and heading round to my second CP I thought it’d be quicker to head back up onto the Monsal Trail and get to it that way. Had I known better the junction of paths at Monsal Head I would’ve known that to be a silly choice, but it was too late. By the time I realised my error, my stubbornness had set in and I was going to get that CP no matter how many miles out of the way! So, a few hills and expletives later I bagged CP2 and was back on track!

CP3 was south along the river Wye along beautiful Monsal Dale, and at the top of an evil hill, then CP4 was back along the tops towards the Trail again. Then it was time for another decision. There were two up for grabs along Cressbrook Dale but these seemed too far away from any of the others and now I just didn’t have the time. So I headed back over to Monsal Head and up behind the lovely Packhorse Inn for a long uphill slog towards Longstone Moor. I bagged my next CP and headed east towards Longstone Edge, and my next mistake.

Happily running down a track with a steady downhill gradient, I started to enjoy myself, to enjoy the running, until…..more expletives….I had missed my turning! Had I? More desperate map reading…yes I had. So, back UP the track I had been enjoying so much, and I realised why I’d missed the turn because even at a standstill it was difficult to find. And when I did find it I wished I hadn’t as it was sticky, deep, leafy bog and pretty tiring to run through. Things got worse as my next CP was up, up and away on Longstone Moor – it was pretty lovely up there though.

More decisions. I was in my last hour. I had run miles and not got that many points. The finish was to the south and my legs were tired. So I’m not sure why I took the decision to head north to a low scoring CP, but that’s what I did, and I was feeling the pressure all the way! Heading back south I knew now that I pretty much had to go straight and collect any CPs which were not too far off course. This I did without too much trouble and dibbed in with 7.5 minutes to spare.

I reached 9 checkpoints, got 295 points and ran over 15 miles. I felt that this course was more spread out than the last one, and it was a lower scoring event all round, with only one person getting to all the CPs (with time penalties), compared to 7 in Round 1 (without time penalties). So all in all I’m happy with how I did! I came 6/21 in my FV40 category. The only other Striders I’m aware of were Caroline and Andrew Fry who came an impressive second in the MIX category with 355 points – well done guys!

The overall winner was Philip Vokes, with 490 points.

Round 3 is in Grindleford on Sunday 15th. I’m expecting this one to be more challenging on the navigation, and looking at the forecast this week I think it’ll be a boggy one! Hoping to see a few of you there! 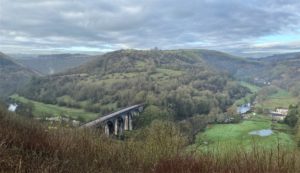