The overwhelming memory of this race is that it was wet. So wet. I remember saying after last years drenched York Marathon that I was pretty sure I would never run in worse conditions. I was so very wrong. Four days on my shoes are still pretty damp, so my review is probably impacted by this.

Rewinding to the start, I had a free weekend, so decided to ‘treat’ myself to a spot on the Pontefract Half. Being as it’s a) near enough to both Sheffield and my folks house in Leeds, b) a race I’ve never done before and c) much cheaper than the half in Nottingham on the same day, it seemed like a good choice – the 8.30am start notwithstanding. Arriving on the morning, there was lots of very conveniently located free parking, more than ample toilets and the start line was easy to find. Just under 900 runners were registered, but the forecast looked to have deterred a few. I lined up towards the start, and was ever so slightly surprised by an incredibly low key start which was along the lines of “off you go then”, which formed a contrast to the elaborate start to the Sheffield 10k the week before.

From the very start of the race the front runner absolutely sped away from everyone else. After less than 100 metres there was no doubting who had already won the race, and the 12 minute margin of victory wasn’t too surprising (although more on that later…).

The rain in the first few miles was steady and quite pleasant. The course quickly leaves the town centre and the “undulating” course takes a lot of very pleasant descents over the first 4-5 miles. I had no target in mind, but was hoping to stay close to 6:45m per mile pace to stay broadly in line with my half performances earlier in the year. Looking at my splits now it’s fair to say I maybe set off a tad quick as I came through 5k in around 20 minute pace. Nonetheless, my journey through the country roads between Pontefract and Ackworth felt good, I’m not sure if on another day the scenery would’ve been nice or nondescript. Heading towards the 10k mark I felt that a PB was achievable if not realistic.

Then the annoying part of the race. At exactly 6 miles there is a fork in the road, coming up towards it – I saw that a majority of runners seemed to be heading right, but there were also a number of the faster runners coming down with haste from the left. As I reached the split, without any marshall in sight, I started to veer right alongside someone next to me, then heard a runner shouting “it’s that way it’s that way”, stopped, turned, and was informed by a very irate passing runner that it was indeed right, but a lot of the front runners had been sent left. He claimed he’d run two miles in the wrong direction which I’d take with a pinch of salt as that would’ve put him at close to World Record 10 mile pace… but it was clearly a spot of bad organisation. I’d say the mishap probably only cost me 10 seconds, but at that stage I was pretty clear that any hope of a slender PB was gone. At the same time the heavens absolutely opened up and we were forced to pay for the nice descents in the first half with a pretty much consistent incline from then to the finish.

The second half felt like a bit of a slog at times, my average pace dipped slowly and consistently, going over 6.45 and ending up around 6.50. Going back through Ackworth and Waterfield on the road to Pontefract was probably really scenic in the sunshine, but it was hard to see anything such was the volume of the rain. Thankfully the roads were alright underfoot so slipping wasn’t a problem. The last half mile brings you back into Pontefract, with a town centre finish I’d imagine would be really well supported if everyone wasn’t cowering from the rain in a nearby Greggs. I came through as the sole Strider with a chip time of 1:29:30, a years ‘worst’ but still very happy to come in sub-90. It’s definitely worth a trip out from Sheffield if a few Striders fancy a challenging but not necessarily difficult half, and the 8.30 start does mean it doesn’t take much out of your day.

There were 651 finishers in the Half, with the race being won by Jonathan Walton of Leeds City Athletic Club in 1h12:52. The first lady back was Nik Tarrega of York Knavesmire Harriers in 1h25:50. First and only Strider was me in 30th place. 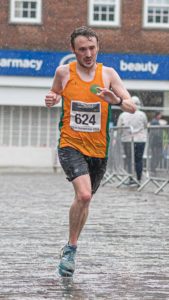