This year was the 36th running of Tywyn’s Race the Train event, a major event on the calendar of this small mid-Wales coastal town, which lies between Aberdovey and Barmouth.
The weekend starts on Friday night, with a ‘pasta night’ put on at the King’s cafe situated in the Talyllyn railway building, also the home of the race train.  Then things rev up early-ish on Saturday morning, there being 4 races staged before the main race in the afternoon.
There’s something for all the family, with a tough 10k race starting at 11:15, and a 5.5m and 3.5m starting at 11:20.  The 10k is a race the train event, with the train taking 55 minutes to finish.  There were loads of children racing in the shorter races, the minimum entry age being 10 and 9 years old respectively.  Finally there’s a Toddlers’ Trot at 1pm, a 1 mile run through the streets of Tywyn.  All races were really well commentated, and the school playing fields were set up with bouncy castles, children’s rides and a very well stocked (and cheap) bar!
I based my family holiday around this event and chose to stay at Elens Place (highly recommended!) in Tywyn, the back window of which looks over the race event area.  The owner of the house, whose daughter has run it three times and whose 20 month old granddaughter was competing in the year’s Toddlers’ Trot, came round on Saturday morning to excitedly pass on his advice for the afternoon’s race!
The main ‘Rotary Challenge’ is 14 miles and starts at 14:05 just outside the Talyllyn Rail station.  The race proceeds through the streets of Tywyn and heads up the valley where the route follows tracks and fields for the first 7 miles.  It’s undulating, but nothing like the second half.  This is where you need to make good time.
The scenery is something special!  The train first came past at about 4.5 miles but was barely visible through the trees at this point.  The first sounding of the whistle was intimidating and exciting though, despite me already knowing I had no hope of beating the train. 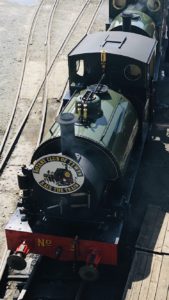 At about 6.5m you look left and see a trail of runners way up on the hillside.  Then you realise they are running in the same race as you and know that things are about to get a lot tougher!
The climb starts fairly steadily at 7m and then suddenly you are faced with a Salt Cellar fell race type ‘on all fours’ climb, albeit nowhere near as long, and then you are racing along a narrow path with a steep drop to one side.  Overtaking is impossible on this path so I got a bit of a rest as those in front of me weren’t moving quickly.  The train made another appearance at the bottom of the hill and it dawned on me that one wrong foot placement could’ve resulted in a downwards tumble onto the train itself!
Around 8 miles the trail thankfully snakes downhill towards the Dolgoch falls which is where the 10k race started earlier in the day.  The route goes up past the lovely looking waterfall but there was no time to stop and look.  This is where things got really tricky again as the path was all tree routes and terrible mud.  Loads of deep, sticky mud.  I went in past my knee and almost lost a shoe!  I think the guy next to me disappeared completely, but there’s been nothing in the news…
As I remember it, the trail flattens out a bit here and suddenly we were hit by a gale-force headwind, which remained for the final few miles.  In one respect it was welcome as it was a hot day and the wind was refreshing.  But on tired legs, on the open fields, running into the wind was tiring and demoralising.  I think it was at about 11 miles I was faced by a steepish hill and could barely even walk up it, my legs gave up – that was a really tough part (reminiscent of the steps out of Brincliffe Edge Woods on section 10 of RSR).
The last few miles into town was just a case of head down, keep moving.  In the near distance I could see the guy I was chatting with at the start and I just focused on catching him up.  I did, and we yelled a few things at each other but all words were lost in the wind.  I left him behind and continued on.
Coming down into town the crowds were growing and they were brilliant.  Everyone was yelling my name.  One called me ‘Steel’ (!), another yelled ‘come on Sheffield!’ :-).  The crowds made the last mile, and the slightly uphill finish, really enjoyable and I ran through the finish line with the commentator saying my name and running club, arms in the air, feeling great.
There was a nice medal, a t-shirt, and loads of stuff in the goodie bag, from hair products to bandages!
The race was really well marshalled all the way through, and there were loads of water stations with both electrolytes and plain water (paper cups).  The support from the locals was fantastic and the event just had a great feel-good atmosphere.  In my albeit short running history this is the best event I’ve done and I recommend it to everyone who hasn’t already done it.  I’ll be doing it again for sure.
My time was 2:09, coming in as 41st lady.  Will try to break the 2 hour mark next time!  To my knowledge I was the only Strider this year.
Race winners, Alexander Lanz finished in 01:22:26, and Katie Beecher finished in 01:40:49.
73 people beat the train, including 3 ladies. Full results here
Striders’ Results
Post Views: 836