Well I entered the Race to the Stones back in November and went for the 2 day overnight option of the 100K race along the Ridgeway, which is an ancient footpath claiming to be Britain’s oldest road. The race starts in a farmer’s field in Lewknor, Oxfordshire and finishes on a farm in Avebury, having visited the Avebury Stones 1 mile from the end of the race.

Before I go into the race details I have to give shout outs to John Rawlinson and Steve Irvine for their invaluable tips and advice about the race, all of which came in very handy and gave me a picture of what to expect over the 2 days so I’d like to give out a massive thank you to both of them.

I travelled down the day before the race and stopped in Beaconsfield. At 5.30am my alarm went off and after a short drive up the M40 I was in a field in Lewknor with lots of other runners feeling both excited and nervous.

Runners were on a staggered start every 15 minutes from 7.30am.

So at 7.45am I was off, the furthest I’ve ever run is the marathon so 31 miles was entering new territory and the thought of doing it the following day as well was quite nerve wracking.

I started off in the pack along a track, I just tucked in and set off really slow, at the end of the field we turned right and up through woodland for a couple of miles, chatting to people and it was really nice and social. We then entered a bit of road at the village of Watlington, with people out supporting and shouting “bump”, I wondered what they meant, the next minute I was on the floor having tripped over the bump in the road, only 2.5 miles in and I wondered if I’d done damage as blood was running down my hand, anyway I composed myself, carried on and felt OK, but what a start, only another 60 miles to go! Just after 10K I got to the first pit stop (these were roughly placed every 10K or so throughout the race), I got a medic to check me but just had cuts and bruises.

A quick word about the pit stops, they were fabulous, fully stocked with all sorts of food, you could get  chocolate, crisps, nuts, pretzels, sandwiches, gels, water, juice, coke, porridge, pineapple, water melon, banana, orange, cereal bars and all manned with the most brilliant crews who were always helpful and obliging, giving encouragement at every stop, every stop had medics on hand if you had any issues and as the race went on they were helping so many runners with their blisters.

Not long after pit stop 1 you entered the iconic “field of dreams” as the run goes through the famous corn field.

Following this I ran through more undulating woodland, a lot of this single track but I was more than happy to go at other people’s pace as not to shoot off too fast, around mile 15 you picked up the Thames, this was quite a flat section as you ran alongside the river until reaching Goring (mile 19) at which point you crossed the Thames.

Got to pit stop 3 at approximately 20 miles and you could see there was a very long hill going out of the pit stop, at this point I had some coke and got a bag of crisps and started to walk up the hill chatting to a local who was originally from Oldham, he told me it was a long hill and seemed to go on forever, it lasted for about 2 miles. Once at the top I started running again, I think it was at this point I could feel my legs getting tired and we were more exposed to the elements and the sun was beating down.

The last 8 miles or so to base camp were gradually uphill and becoming hard work, I could see the finish in the distance as it was on the top of a hill but it seemed to take forever getting there. Anyway I crossed the finish line to a nice welcome from the MC in a first day finishing time of 5 hours and 57 minutes, all in all I was quite happy to finish under 6 hours but the legs were heavy and tired and at that point the thought of doing it all again in about 17 hours felt very daunting!

​So I arrived in base camp at 1.45pm, it was a big site with a halfway hub where you could chill out on bean bags, charge your phone and watch, take part in yoga, there was also a big marquee serving food and drink, you could help yourself to all sorts of things, lots of food and cakes on offer, the only thing you had to pay for was beer and ice cream. There was a medic tent where they were seeing to runners’ injuries and also the nice students from Birmingham University were carrying out free massages. Anyway my first port of call was tent allocation, I went and picked up my sleeping mat and the luggage we had dropped off at the start of the race was waiting for us outside the tents there was approximately 1000 tents! I dropped my kit off and went to book a massage for an hour later so that I could go and take a shower before and have a bit of a stretch, the showers were very good.

At this point I was stiffening up and the massage was very welcome, I also attended a yoga class and used one of the many foam rollers on offer.

Runners were coming in all throughout the day to a great welcome from the entertaining singing and dancing MC, he must’ve been at it for 10 hours as runners/walkers were still coming in at 10pm and some were then heading straight out to complete the 100K.

Deck chairs were set up in from of a big TV screen for runners wanting to watch Wimbledon and as the night went on they made fire pits for people wanting to sit out and enjoy the music and atmosphere.

I went to my tent at about 9pm and worrying about how stiff I would feel the following morning and how I would get through the day, I constantly felt little aches and pains during the night and didn’t get too much sleep.

The following morning I was up and awake at 4.30am, they had a full range of breakfast on offer including a full English if so required, I went for a croissant and jam and thought I’d pick up a banana at pit stop 6, they were serving food from 4.30am as you could set off running on day 2 anytime between 5.30am and 7am. As I walked to get some food I realised my legs felt surprisingly well, what a result!

​I did a few stretches and set off at 5.45am with a fellow runner, it was overcast and because it was so early it was very cool, perfect conditions to run in. We chatted for the first 3 miles then he decided to walk and then I got chatting to a Canadian woman and then she decided to walk, the next thing I knew I was at pit stop 6 and I hadn’t felt like I’d been running, I was delighted with the start to day 2 but always had the worry of the wheels coming off at some point. It was very runnable to the next pit stop, runnable but undulating, the run to pit stop 7 was the largest gap of the entire race, approximately 8 miles but even when I got to this point I was feeling fine, I was running in manageable chunks, watching the KM markers and getting a boost when I hit 60km, 70km etc. At mile 18 was pitsop 8 and at this point there was only a half marathon to go. As I left the pits it took a sharp downhill section, it was at that point I could feel pressure on my quads. Once at the bottom of the hill we went through a small village and it then opened up into sprawling fields and hills, it was then 3 miles uphill to the last pit stop before the end. As I went over the hills I started to pass people who had set off walking the previous morning and had gone straight through, they will have been on their feet for 26 hours and weren’t looking happy. I got to pit stop 9 and it suddenly dawned on me that I was going to complete it, so I filled my water bottles again and got some food and set off, I was told about a rutted section of path that was coming up, it was tough going and lasted for about 3 miles and could have easily lead to an ankle injury, anyway I avoided injury on that stretch but before the final drop into Avebury I felt a sharp pain in my left knee so I just took the last section easy as I didn’t want to hobble in the last few miles.

The last 3 miles are downhill into Avebury, you then pass the entrance to the field which takes you to the finish line as the route takes you further along the village so that you can visit the “Stones”, quick photo there then head back the way you came, into the field, up the hill, turn left and a final 400 metres run into the finish area, greeted with another high 5 from the MC at basecamp! I ran the 2nd day 22 minutes faster than the first day in 5 hours 35 minutes, I was delighted!

A lovely welcome from my family, I got my medal went for a shower then chilled for the afternoon watching the cricket on the big screen they had set up.

All in all a fantastic race, superbly organised and a great feeling of accomplishment as well. On top of that I raised £1200 for the Clic Sargent charity!

The official final results have me finishing in 11th place, but they have got my first day time wrong so I actually finished 17th but I’m chuffed with that result!  (There were 730 finishers in the 2-day 100k event.)

If anyone is fancying running this then I can definitely recommend it. 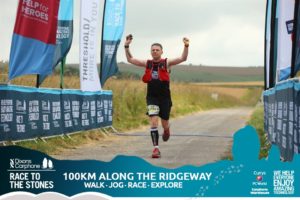