Before I go into detail about Sunday I’ll explain my motivation for entering. This run was to raise funds for a local epilepsy charity who helped me greatly when I developed epilepsy in my mid thirties.

Originally I was running in the Sheffield HM, but due to me having a seizure in the early hours of race day, I was unable to take part. James Norton had kindly put together a program for me that I’d been working to for 10 weeks and I was looking forward to running in my first HM in my home city One thing you learn after living with epilepsy for a while is to have a plan B in place, due to the possibility of a seizure … best laid plans n all that.

Ravenscar was my plan B, hence me lining up with 150 or so other runners on a beautiful Sunday morning outside the village hall. This would be my first trail 10k and realistically I had set myself two goals: to not finish last and not fall over the cliff! Just before the start I quickly scanned the runners to try and spot any Striders but I couldn’t spot any. As it turned out Emma Fitzgerald, who I met for the first time yesterday was the only other Strider in attendance. More of that later.

So when go time was announced off we all set, running about a quarter of a mile until a marshal indicated for us to turn left, where we all found ourselves in a car park. Turned out we should have all gone right.. no worries. We all readjusted and set off, heading towards Staintondale, downhill all the way for two miles or so. Beautiful sunshine, surrounded by thousands of acres of English countryside.

The front runners were already out of sight by this point, and the small field was already forming into smaller groups. I felt fantastic, even allowing myself to think that this had been very wise choice of location for a plan B … then we came to the first stile which would take us through Petards point via a farmyard, heading towards the Cleveland Way. I became aware that my pace had dropped. I was having an on off conversation with a runner from Bridlington but by now she was about an hundred yards in front of me. I’d overtake her then drop back.

The path had narrowed by now, but as no one was in a rush to overtake anyone. There was a murmur of breathless conversations going on. After about a mile I reached the cliff path, just as my watch indicated we had run 6km.. never reight! You know you’re tired when you’re ranting at your watch. Despite my initial concerns about the cliff path it provided a welcome distraction to me starting to wain. I even stopped to take a couple of pictures of the sea, although by now a sea fret was rolling in so not much of a memento.

By now the 10k runners were well string out and even though I was nearer last than first I was quite pleased with how the day was going. Then they started coming..the half marathon runners who had started a half an hour before us. Suddenly I’m giving way to on the cliff path to guys who obviously did this kind of thing regularly. To their credit almost everyone who passed me give words of encouragement… almost. I was just approaching the narrowest section of the cliff path when I hear another runner behind me. With nowhere to move to until I clear the narrow section the guy would have to wait twenty yards or so. Once I’d cleared the section I began to move to the left, clipped the path with my leading foot and ended up on all fours. Before I could get back to my feet, the guy behind me jumped over me and carried on running. Thankfully, I was too shattered to throw him off balance with a volley of expletives, got up and carried on running. Within a mile or so I stumbled out in the shadow of the Ravenhall hotel, and began my uphill climb back to the finish.

By now I was blowing out of everything then I rounded the corner to the last stretch back to the finish line at the village hall. As I was about to cross the line I heard a shout of well done Strider. Thank you for that, Emma Fitzgerald. My time was 1.23 something, I hadn’t fallen over the cliff and I wasn’t last . My sense of achievement and elation at repaying the faith all of the people who had sponsored me was probably the reason for this. As for the event, I will definitely be back next year, it’s testing at times but so worth the effort.

The male race winner was Scott Boyd in 44.38. The female winner was Lucie Cardwell in 54.02 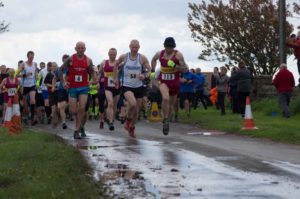