The Suzuki Midnight Sun Run to give it its full name, is a combination of 3 different races over 5k, 10k and 21k (half marathon in non-metric terms) which take place on the longest day of the 20th June in Reykjavik, Iceland.

The term ‘midnight’ may indicate to those like me that you would run through the night, when in reality it gets its name as on the longest day, the sun sets in Reykjavik at just after midnight (12:03 to be precise). Registration was done from the UK and on a good website, the instructions where to collect your number from and drop bags off on the day, were followed and went according to plan. I posted the ‘look where I am photo’ on the Striders’ Facebook page and was heartened to see messages of support coming through straight away. Thank you great club members!

The 10k and 21k start together at 9pm with the guidance that all runners need to be finished within 3hrs. I thought that should be OK, and was targeting a sub-2hr time. Not a PB but something which I could hopefully realistically achieve after 12-18 months of knee injuries and other niggles. Approaching the starting zone I began to get worried, almost all the local Icelandic runners had leggings, gloves and at least 2 layers on. What did they know which I didn’t ? I was donned in the standard Striders uniform of t-shirt and shorts – I admit I haven’t yet wore the running vest (not a pretty sight on me !). I bumped into a young couple from Carterknowle who were running in the middle of spending 9 days in a campervan around Iceland who recognised the Striders logo – small world !

With both the longer distances starting at 9pm (the 5k event started 20 minutes later), I set off with a group within the 50-55min 10k pacing zone; hoping that this speed would suit. It did……..until the 10k runners peeled off after 5k and the half marathon runners were left to themselves. The route was described on the website as hilly and running through a forest. In reality, after leaving the main sports arena in the east side of the city centre, it meandered along main roads and paths, running parallel with the river through scrubland. Possibly scrubland is a bit harsh a term but it was certainly not a forest and as for hills, in Sheffield we may describe it as lightly undulating at its most severe areas. Given the proximity to the city centre, it didn’t have any of the scenic highlights Iceland is famous for; not that it was dull, just not probably what I had expected. Friendly marshals did their duty at all road junctions and constantly shouted encouragement in perfect English.

One thing became apparent after the 10k runners had left the main route – other runners kept overtaking me. And I mean this as I was not overtaking anyone at all! And I mean, no-one. I looked at my watch, a steady 8:30 – 8:40 per mile, ahead of where I thought I would be and certainly not slow by my running style…..but they kept on passing. I tried to put this out of my mind and expressed a little pleasure that the 10 degrees and evening sunshine was suitable conditions for my running attire after all. Locals, what do they know !

After continuing to head in an easterly direction out of the city, we started to loop back and passing the golf course around 8 miles, an enjoyable gentle mile followed downhill before once again hitting the city outskirts and the local road network. A few runners recognised the Striders shirt, one runner from Nottingham as he passed cheered me up by shouting ‘you Striders get everywhere!’. Another from Manchester with his 100 parkrun t-shirt on was clearly running a massive PB and bounded away after exchanging pleasantries. Still runners were passing me in what appeared far too frequent regularity.

The final few miles were painful for me, simply a sign I think that I haven’t been putting enough (for enough, read “any”) distance work at a decent pace recently. The early few miles though at a good speed for me had managed to bank some savings and I went over the line in 1:55:25, well inside my target time.

The after-race rewards were plentiful, hot soup, nachos (sour cream and relish if you wish as well), cinnamon rolls, bananas and pretzels as well as some sickly sports brand drink. All went down with thanks from the finishers who also received a weighty medal. One thing was missing – spectators ! Apart from a handful at the start and 20-30 at the finish, spectating to watch a running event in Iceland is clearly not something the locals are used to.

Walking back to the hotel just after midnight with work colleagues, just as the sun dipped below the horizon seemed special; just as it did a few hours later after a beer or two with the sun making another reappearance. An enjoyable event overall. 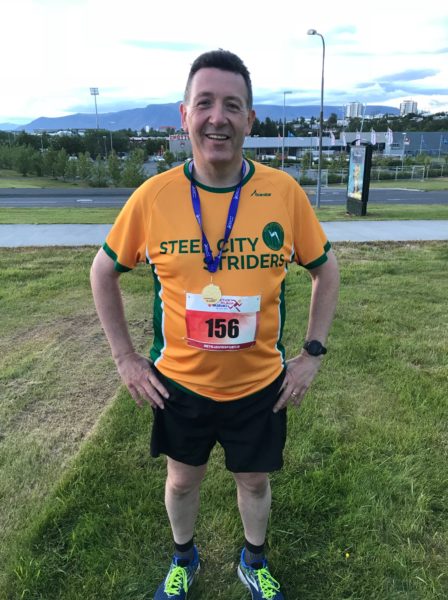