Ricky’s Race is a 7km category BS fell race (albeit at the trail end of the scale) starting and ending at Darley Bridge, near Matlock. It’s organised by Matlock AC and has been running since 1997.

After thoroughly enjoying Salt Cellar and Bradwell Fell Race this year, I decided to give this race a try with my not-so-little brother Chris and one of his friends.

Race HQ was at The Square and Compass, with standard milling about for race numbers (and only £5 if you preregistered). I bumped into a family friend who has recently moved up this way and runs with Matlock AC, which was nice. The start just the other side of the River Derwent, following a short and good-humoured race brief.

The first half was on a mixture of trail and track, climbing up through woods towards Birchover, before descending (and then ascending) back into Darley Bridge. The descent was fun, and just about wide enough to get past people.

You quickly pass through Darley Bridge, then up a steep, grassy climb to the top of Oaker Hill – you could see runners (well, mostly walkers) in profile heading up the shoulder of the hill on the way into Darley Bridge, so it wasn’t too much of a surprise, but seemed to get steeper the closer you got. Apparently, the view from the top is great, but I had no energy left at that point for looking anywhere but at my feet. The route then wound back down a nice grassy descent towards the finish in a field.

I finished as first (and only) Strider, and second Pembroke (by some distance). First male was Greg Hopkinson of Beeston AC in a time of 29:37, and first female was Eleanor Lunt of Long Eaton RC in a time of 37:07

Prizes were given out at the Square and Compass afterwards by Ricky Wood (THE ‘Ricky’), who thought up the race as a junior runner with Matlock AC – the race director clarifying that it wasn’t a memorial race, as most seemed to assume (including me). As the only Strider, and in the absence of a prize for averagely-paced, moderately over-weight, mid-30’s men who walk up hills, no silverware was held aloft by green and gold-clad arms (or shoulders, it being vest weather), but I did have half a pint and some crisps. 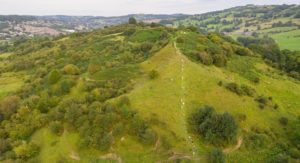