This was my first Its Grim Up North event and I was looking forward to it. A fellow Strider recommended their events to me after I joined Striders back in March. Roche Abbey is only a twenty minute drive from Sheffield so I did not even have to get up too early. The race HQ was at a pub called The Travellers Rest in the village of Brookhouse near Maltby. It was a cold day but no rain was forecast. There was a 10 km, half marathon, twenty mile, marathon and ultra option which all followed the same route.

I met Vicky Bazzadella at the start who was running the twenty mile race and flew ahead of me. It was great to be cheered by Sandie Farrow and her son near the finish and hear “Go Strider” as my legs tried to carry me on.

All races except the 10 km race started at 10 am after an enthusiastic welcome and briefing by the organisers and we were off. Nearly all of the route was off-road, taking us across fields, through woods and over and through a few styles and gates. It was quite cold but the ground was firm under foot. The marshals were cheery and encouraging. There was one section consisting of a boardwalk over boggy ground which was hazardous as it had missing planks and wobbled as you ran on it but we were warned of this.

I had run the Tissington marathon the previous weekend so wasn’t aiming for a fantastic time. I just kept up a steady pace but it turned out to be a bit too fast as my legs suffered later on. The company was great and I even chatted to a lady who had come up from London for the weekend with friends. Some runners were storming ahead and came flying past in the opposite direction as the route wound back on itself in places. There were two aid stations, one in the old gatehouse of the abbey itself and one at the start. These were stocked with Jaffa cakes, water, squash and coke. My weakness is for coke during marathons and I have been known to chug too much down and regret it later on.

Roche Abbey is a beautiful site and well worth a visit. There were many dog walkers on the route and everyone was considerate of each other. I had an eye out for tree roots. There were at least two sections where after one lap I really had to walk it. These were steep gradients that only the hardcore amongst us would attempt to run up. The marathon was four laps and I was flagging on the last lap. The scenery really did help me push on especially when I was running on my own on the last lap. Runners had spread out so far by that point.

I managed a time of 4:20:22 in the marathon and came 12th in that distance. First male was Stephen Kirk with a time of 3:00:18 and first female was Steph Jiggins at 3:54:32. Vicky smashed it on the twenty mile event and was the first female at 2:38:51. First male in that event was Dean Kirkham at 2:09:10. There were some really fast runners that day. I’m definitely signing up to more IGUM races this year.

The full results are here and the Strider results: 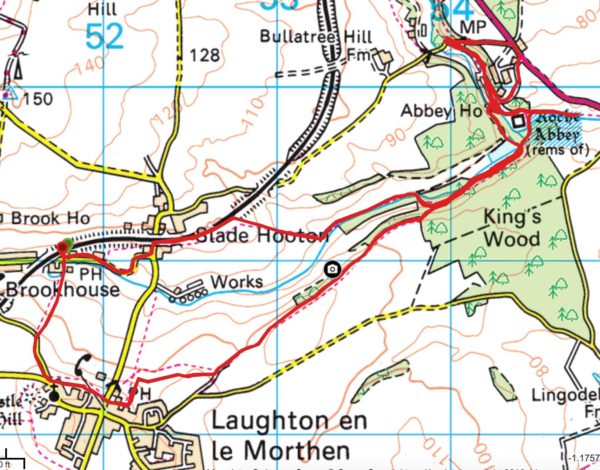