The type of drunk you become is heavily influenced by the mood you are in as you have your first drink, research shows. Already unhappy = miserable drunk. Enjoying a night out = happy drunk, life and soul of the party. Feeling excited = Mary Poppins exuberant. Tired before you start = likely to be found later, slumped in the corner. Full of sorrow = Crying tears into your pint / V+T.

This is no different from Confirmation Bias, or Neuro-Linguistic Programming, really – say you will, and intend to be, and you most likely will achieve it. Henry Ford (I think) had it that, ‘whether you think you will or think you won’t, you’re usually right’.

I’ve been foolishly nursing a foot injury and continuing running for about three months, like you do, and went to Liverpool by myself and wasn’t loving it at the start line. My experience or recall of it is, predictably, more dour than Tony Bilsborough’s, who loved his return to our shared home city and the race.

I was born here, right on the route, and lived my first year just off ‘Upper Parly Street’ (Liverpool 8), so I am used to the sound of a Liverpool lullaby or two. Being ‘Rock n Roll’, this event has bands at every kilometre.

The event is huge and it can lead to getting tired of hanging around. The start is very organised and staggered –not a case of all together now at all. The Half is a full hour before the Full Marathon start and each corral sets off a short time after the previous, so there is clear road ahead.

I just found I could not shake off the low mood at the start, and these thoughts caught me as I curbed my enthusiasm on the way round:

I will go back in 2020, but only for the Half. I will go for the weekend again as there is far too much to do to do it as a day tripper, But if you want to take a ferry ‘cross the Mersey you have to go in the week – it only runs for commuters these days. Tourists get river and canal cruises. 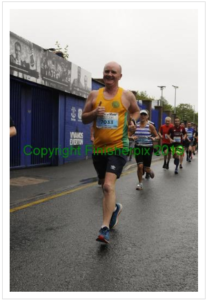 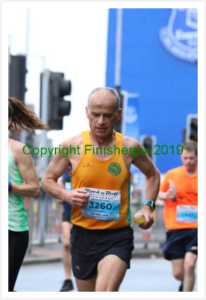 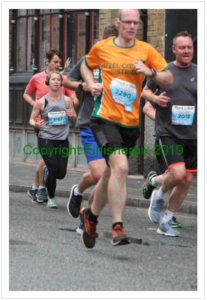 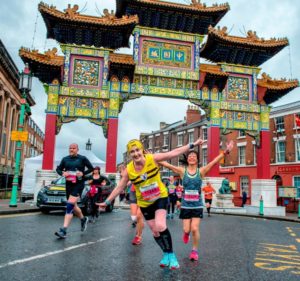