I’ve been running now for just over 2 years and participated in mainly half and full marathons with the race to the stones ultra-marathon thrown in for good measure this year. I’m one of the clubs slower runners (plodder to be precise) who has been happy to complete the distance I’m running rather than go after a PB.

After being successful in getting a Percy Pud place this year it suddenly dawned on me that I haven’t actually done a 10K before and if I am going to improve on pace over longer distances this may help.

Off I went then to Rother Valley for my first 10K!

I arrived at the venue way before the start time of 10:00 which is normal for me as I like to be early and take in the atmosphere however to be honest I arrived before any of the 5K runners who were off at 09:00.  I sat in my car overlooking the lake and things weren’t looking good. To say the conditions were bad was an understatement as it was throwing it down. Undeterred I waited and one by one the 5K runners arrived so as the weather cleared I got out of my car to cheer them on.

Being a slower runner I usually enter city races where there are loads of runners and a good atmosphere at the start. The 5K race didn’t provide either as it was low on numbers (17). The 5K was once round the lake so I went to the finish to see them over the line and was entertained by the organisers who couldn’t get their microphone or music systems working despite their best efforts. It was like watching the great Normal Collier in his prime (showing my age there).

At last it was 10:00 and time for the 10K which was 2 laps of the lake and for which there were more competitors (206). The start of the race was on road which was ok however the road turned to track down the back straight which is a 50/50 split.  This isn’t normally a problem however there were huge areas that were waterlogged and was more like a fell race. There was no avoiding the water as trying to go round it meant going through a bit of a quagmire (slight exaggeration) although it was poor.

I’m not going to use the conditions as an excuse though as the winner passed me as I was just completed my first lap and he finished in an amazing 33:59.  For me it was 1:08:04 and once finished off I went to the club house for my medal and T shirt which disappointingly was a medium with an XL label on it.

You may be forgiven for thinking that I didn’t enjoy my venture out on Sunday morning but on the contrary, I have never not enjoyed a run (plod) and I will be back again next year to do it again. No it’s not the best organised, the course doesn’t suit adverse weather in places and it lacks the atmosphere of my city runs but hey…for some reason I loved it!

205 entrants for the 10k which was won by Jamie Arkle of RAF Athletics in 33.59. The women’s race was won by Nicola Curtis of Scunthorpe and District AC in 38.04 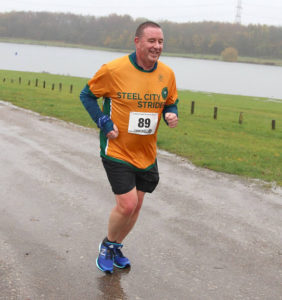