Nancy said we should do Rotterdam because it would be flat & cool. Rotterdam was a cool, flat city but the weather was roasting. Nancy assured us that her pre-race rain dance would sort things out, but her efforts had clearly been lacklustre.

The race first started in 1981 and has been the site of marathon course records. Starting at the iconic Erasmusbrug, the route took us around the harbour area, past the Feijenoord Football Stadium, alongside parks, down canals, complete with windmill, along the edge of woodland as well as embracing a number of the city’s innovative architectural features. None of the diversions offered relief from the unseasonal 21 degree C heat or head winds.

There were drink stations every 5K. Further innovation came in the form of natty paper cups with sponge ‘lids’ with cut outs for drinking whilst running & squeezing out to cool down. However these were not always successful. An energy drink was also available (identifiable by the chants of Ah-Ah) and later tea which, inexplicably, was supplied in tartan cups. There was a good supply of wet sponges & marshals willing to hose runners down.

There was lots of music around the course from live bands, drumming groups and DJs. The crowd support was amazing with whole families out in force shouting encouragement & handing out goodies. In addition to the usual water, jelly babies & orange segments there were tomatoes, strawberries and even salted crackers. As the end of the race neared the crowd enthusiasm crescendoed & the throng formed a Tour de France type funnel. It was difficult to do anything but keep running in the circumstances.

The race medal was nice & chunky & the pre-race collection t-shirt okay. The post race offerings were a banana, an apple & a choice of recovery drink – one disgusting, the other not, but impossible to know which was which until it was too late.

In more benign weather conditions this would have been a very different race.

There were 14557 finishers. The first male was Marius Kipserem who finished in 2 hours 4 minutes and 11 seconds. First Lady was Ashete Bekere in 2 hours 22 minutes and 48 seconds. Striders’ representation was ladies only, the following taking part: 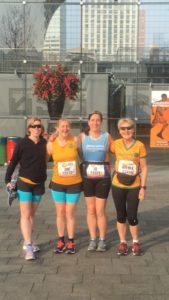