What Christmas present do you get for the man who has everything? The answer this particular year was an eight-week bespoke training programme designed to get your husband to break 20 minutes for a 5k for the first time in his life.

It’s been a long-held ambition of mine to join the sub-20 set and so a bespoke training programme designed by Matt Rimmer Running was perfect. Matt blended my not-to-be-missed sessions (like Pete Brown’s Thursday track) with long interval sessions, progression runs and the odd long run with fast finish, to get me in the best possible shape to tackle a 5k sometime in March. I could have chosen a parkrun to attempt, but wanted something chip-timed and UKA-certified to make it more official, and the Run Nation Yorkshire 5k and 10k held at Rother Valley fitted the bill.

The sessions were hard, especially undertaken in the dark and cold, but progress was seen, I took 2 minutes off both my half marathon and 9 mile PBs at Leicestershire and Norton respectively, both times had been held for at least two years, so something was going right.

The weekend of the race arrived and freezing temperatures and strong winds were forecast, not something you want on the exposed banks of the Rother Valley lakes, and sure enough on the morning of the race we were greeted with settled snow on high ground, leading some to frantically enquire about the race going ahead. Rother Valley, being in a valley amazingly, did not have any snow, it was just bitterly cold with a fine icy drizzle.

5k runners were ushered to the other side of the lake from the 10k starters, and were told that we’d have to listen for the horn going off before we started our race – so much for the chip timing – and soon enough we had a nod from our marshall, heard the distant horn and took off at break-neck speed.

I may have got progressively faster but my ability to pace was still abysmal and after a blistering first km, I managed to slow down to complete the first mile in 6.15, still nearly 10 seconds faster than ideal, and I don’t think I recovered from that, completing the subsequent two miles progressively slower and stumbling over the line, gasping for breath, in 20:12. Matt’s training programme has been excellent, I think it was mostly the pacing and a little bit of the weather that let me down, but the good thing about a 5k is that I can just try again next week or the week after!

The day wasn’t all about me, however, and Striders managed to get among the podiums in both races, taking away generous cash vouchers to boot. In the 5k race, Emma Norton took first lady. In the 10k race Tom King took first place overall, Peter Keats finished second M45, and Helen Eberlin was first V70. Congratulations to everyone who ran, especially in those fairly grim conditions. 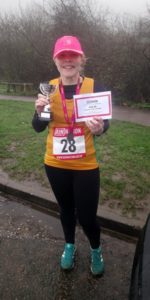 Emma Norton with first lady bling at the 5k.