Many people tried to urge him to adopt a more scientific approach to training. Billy wasn’t interested. ‘Coaching? If I had a coach telling me where to go, I just wouldn’t do it – I just won’t do as I’m told. That’s how I am. Track sessions? I just cannot get it into me head to do two laps of anything. Repetitions. I tried reps the very odd time, but I didn’t like it. Rest and recovery? I haven’t heard such bloody rubbish in all my life. There was a five week period when I set the Bob Graham record, the Ennerdale record, the Wasdale record – and the Ennerdale and the Wasdale are two of the hardest races there are’. ‘It really does annoy me’ he says, when I mention the fashionable term, “over racing”. ‘Honestly, it just makes the hairs on my neck stand on end!’

It took me a very long time to read ‘Feet in the Clouds’ but there are some inspirational chapters in there and the quote above, as well as the amount of weekly miles Billy did, resonated with me and, with January fast approaching, I decided to complete RED January and upped my mileage considerably by running to work and back on top of my usual running.

First test was 4 Villages half on the back of 3 heavy weeks of training and I was concerned I’d crash and burn. Far from it, I felt strong and timed my second best half marathon time ever. Proof that I should just keep on going??

With Seville marathon 3 weeks out (Europe’s flattest marathon apparently), there was still plenty of working days left to slog it up and down ‘that bloody hill!’ which required a 5.45am alarm call every morning which I duly answered. With a week to go I decided that perhaps I should taper so only ran to work on Mon/Tue/Wed and took the car Thursday and Friday. A 2 day taper should suffice.

A flight to Seville with Ben and Steve was preceded with the obligatory couple of pints in the airport and a good chat to a load of fellow marathon runners making the trip. Saturday led to a 4 mile jog to the expo, a few more interesting conversations and the worst pre marathon pasta meal ever – if ever you get offered a pasta party – turn it down!

Ben and Steve are good friends with the owner on FBR, ‘Faster, Better, Runners’, who make the heelless running shoe and it turns out that Ben was on the development team for the shoe. We all take a spin on the treadmill with the shoe and all walk away with a pair – to be tested fully another day.

The goody bag contains a pink jacket so there are now up to 15000 people walking around Seville with pink jackets on. It wasn’t difficult to play spot the marathon runner. After my under use of the pink Dewsbury shirt, my immediate thought was wear it to the start and ditch it – by the time the race started on Sunday morning, it wasn’t just me that had had that thought!!

Ben had asked me several times what my goal was for the marathon and each time he got the same response, ‘I’ll see how I feel on the day’. Deep down 3.10 was always a target as it was the GFA qualifying time but I’d never got close and the last attempt, in London, ended in 3.28 and almost heat exhaustion.

The race started at 8.30am, (7.30am UK time), thank god for those 5.45am morning calls. The 3.15 pacer’s helium balloon burst after about 500 metres and, I assume, so did all the others as I saw no pacers again after that. I set off at 7(ish) minute miles and wondered when, as I always did, I would crash and burn (usually about mile 19). I kept the figures in my head and kept making wild assumptions based on current splits. ‘7 minute miles means 91 minute half and 182 minute full’. If I speed up I could go under 3 hours’ said one voice. Another said, ‘don’t be stupid, you’ll crash and burn before then so slow down now!’. The conflict was awful but I decided that if I made up time now and crashed later, like I always did, then at least I’ll be faster than last time.

10k at 44mins, 14k at 63 mins, 20k at 88 mins, 28k at 125 mins. Things were going well but the heat was rising. Just keep pushing. Pain is temporary but pride is forever. 3 times I stopped for a few seconds at a water station to get a proper drink. Was this foolhardy or a good strategy?? The legs were going. 7 min miles were becoming 7.20, Here we go again but only 3 miles to go. The maths brain was still alert. 3.10 is still on but it’ll be close. The home straight and the watch ticks onto 3.09. Oh shit! I need to run! There were 3 arches. Which is the finish one? My eyes were glued to my watch, not the route. 3.09.40, 3.09.50. nearly there. I stopped my watch and looked at it. It said 3.09.57!!! Whilst I was elated I must have looked a sorry state. Not a smile on my face just pain etched everywhere as I wobbled about taking every bit of fluid offered.

To go back to the original Billy Bland quote, those who know me know I can’t do proper training and make it up as I go along. Who knows what I could do if I did some proper training – but I doubt it’d be as much fun! I hated it and loved it at the same time. Roll on Frankfurt – and maybe London next year. Already we are discussing where the next few minutes could be saved. Oh no!

Huge thanks to Ben and Steve for a brilliant weekend away.

There were 9148 runners in the marathon. It was won by Tsedat Abege Ayana in 2.06.36. The female race was won by Guteni Shone Imana in 2.24.28. It’s a very rare occasion that I can say that I was first Strider! 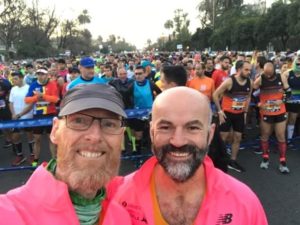