Mow Cop is a small village near Congleton, which is where I grew up. We spent many a time at the Castle, which seemed huge as a kid and felt a lot smaller at the finish of this mile race! Reading the Mow Cop info the Castle itself was apparently built as a summerhouse in 1754, built to look like part of a castle of a bygone era. Apparently built with the wall broken to look like a ruin, I never knew that as a kid. 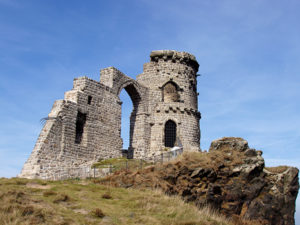 Officially beautiful, National Trust maintained Mow Cop Castle is a type of structure known as a folly built to enhance the landscape. A somewhat apt title in this instance.

The race itself has been around a long time, first held in 1982, although was absent for a few years. It has a bit of a reputation for being a tough race, known as ‘fell runners revenge’. Perfect for me! The last few years since I got in to running I’ve wanted to go back and run this race, my sister did it recently and I managed to get her to agree to go back and do it again with me this year. So an early depart from work and a trip over from Sheffield to Mow Cop for a 1 mile race!

There is a kids run first, 2 fun runs and a club run. All very well organised and friendly. The race starts at the bottom of the hill, no surprise there. My sister wisely got us to park at the top of the hill so we didn’t have to go back down after! So I knew what I’d let myself in for after walking down the hill to the start. At the steepest part (25%) looking down it honestly looks like the road just drops off! My sister started her race first and I took the chance for a quick warm up at the bottom of the hill. You can’t be late getting to the start because you have to cross the train crossing, get caught out by passing trains and you’ll miss the start of the race! We were informed of the crazy course record time of 6minutes 12 seconds (1991) before we set off, anyone who could break it would get £100 and this will keep rolling over until it is broken. It wasn’t broken this year.

It’s hard to know how to pace a 1 mile uphill race. So I didn’t and just set off as hard as I could, worrying about the steepest part of the hill as it came in to view, people slowing all around me. It really is tougher than you think. But soon I was at the top and turning in to the castle car park, finishing as first female! Over a minute outside the women’s record. Most impressive performance for me was an under 13 girl who finished 2nd female, not far behind me. She was so determined and I was pleased to see her win the first youngster prize and second place female prize. I got a lovely little trophy and some cash for my efforts, petrol money reimbursed!

All in all a great race, the village all come out to cheer people on and runners who’ve finished come back to spur you up the hill. I heard one man had run the fun run then turned straight around to go and do the club run and finished that race pretty high up! Once was enough for me.

If this type of challenge interests you then on Wessenden Moor near Huddersfield there is the Meltham Murder Mile with the Meltham Murder Maniac Mile where, as soon as you get to the top, you turn around and come back down. Your best chance of breaking your pb for the mile. ed.