Back in March 2018 I announced myself as finally becoming a SCS with the following post:

The 33 year old has penned a permanent contract with the Steel City Striders.

“Bish” originally started this running career with the Handsworth Roadhogs during the 99/00 campaign. Competing on a regular basis until struck by injury was forced into retirement.

After much persuasion from Tim Binstead, Adam came out of retirement and soon found love for the sport again. During 16/17 campaign Bish’s confidence grew further after competing in the Meltham 10k and noticed the dramatic drop in his Park Run times.

After competing in the 2017 Percy Pud it was always a dream move to become a part of The Gold & Green Army.

“Everyone at the club has been so friendly with me and I have loved training with them on Monday Nights – Heeley Group.” 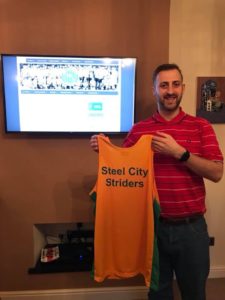 I’ve proudly worn the vest and have enjoyed every minute of it.

But on a Sunday 14 April, I walked into unknown territory by running my first ever Half Marathon. It’s fair to say I don’t do things by half measures and certainly don’t do it the easy way. This race was important to me as I wanted to prove to myself that if you put the work in you will reap the rewards. I’d done my training, I was head strong. It was just about going out there and doing it. Simple!

Over 230 members of the Green & Gold stood proudly on the City Hall steps for the inaugural race photo before heading down to the starting line. That’s round 4% of all finishers which is Vaporfly material.

Everyone had a “game plan”, whether this was to pick up maximum points on the Road Race League, get that PB or just get round in one piece. My game plan was simple, “don’t make a fool of yourself”.

The race started and I found myself in front of the 1:35 pacers. I took it easy and saw a few familiar faces for the first couple of miles. I was trying not to get carried away with the event and remained focused. Then the ascent began. I thought if you treat “the hill” with respect you will be able to kick on and I did just that. I probably treated it with too much respect as the 1:35 pacers passed me at Banner Cross. But, if I could see them, I could catch them.

I got to Norfolk Arms in one piece and then race face was on. I started overtaking other competitors and reeling in the pacers. The crowd played their part with numerous Striders positioned around key points of the race in full voice “GO STRIDER…..GO ON BISH!” By Hathersage Road I caught up to the pacers and it was a case of getting in front of them again. I did this by Mile 7 where I saw the clock and briefly checked the watch and I was doing “OK”.

I really started to go through the gears and I just had to keep going. I had flashbacks the number of times I’ve ran on Limb Lane with Heeley – Monday Night and that’s what spurred me all the way back to Miller & Carter.

After pinching a jelly baby I started the descent and the wave after wave of support just carries you down all the way. Everything you’re thinking – your splits, the competition in front of you, not to mention the aches and pains – it all just simply goes away and you just soak it all up and it carries it all the way to final 1 mile marker.

The slight uphill climb to the finish is something where you have to dig deep. You draw upon past recces and remember your training and that last 400m you give it your all. I must have passed 7 / 8 people before crossing the finishing line. It was over, I did it. I could now celebrate by drinking my body weight in beer. Unfortunately the first one was non-alcoholic. My overall position 455 with 1:34.12 (Gun), 1:33.53 (Chip)

It was great to chat amongst all the fellow striders who participated afterwards and to congratulate them on their achievements.

(The rest of the Striders’ results from this year’s race can be found at: https://www.steelcitystriders.co.uk/2019/sheffield-half-marathon-result-2019/) 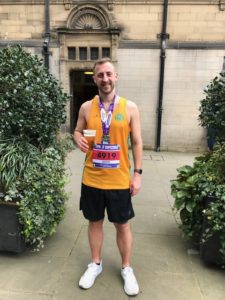